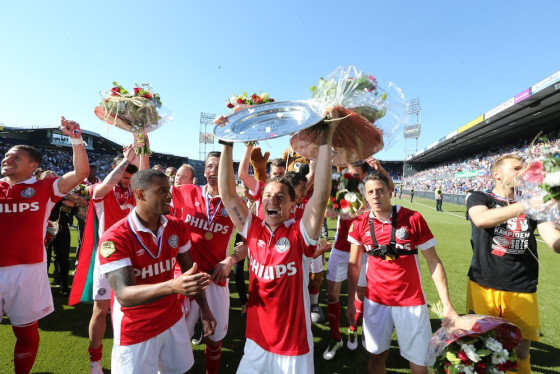 PSV Eindhoven have clinched the Eredivisie title in the last day of league competition after Ajax of Amsterdam could manage no more than a draw against De Graafschap.

Ajax and PSV were both on 81 points going into Sunday’s matches but Ajax was assumed to have the title in the bag as they met De Graafschap, second bottom of the Eredivisie and in the relegation zone.

But Ajax could manage no more than a 1-1 draw and PSV beat PEC Zwolle 1-3, prolonging the Eindhoven side’s Eredivisie title for a second year.

‘Hardly anyone thought we would do it, but the best titles are won on the last day of competition,’ PSV’s coach Philip Cocu said.

The win means PSV will qualify automatically for next season’s Champions League, while Ajax will have to go through qualification rounds.

This year’s KNVB cup was won by Feyenoord, leaving the Amsterdammers without a major trophy this season.

There was disappointment for Amsterdam too on the hockey pitch, as Eindhoven side Oranje Zwart took the men’s title 3-1 in the third of the best of three final.