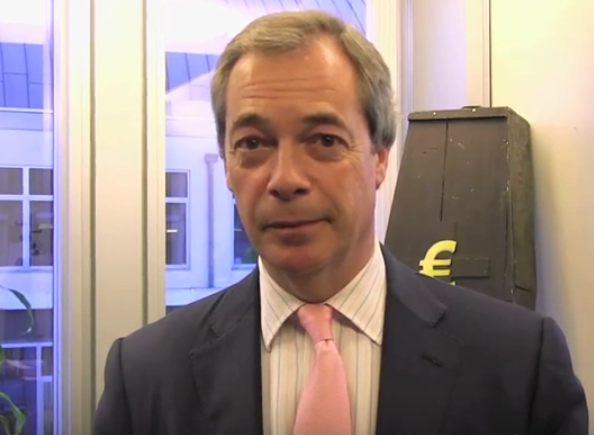 British Eurosceptic Nigel Farage will talk to a rally of ‘no’ voters near Amsterdam on Monday evening, as the campaigns for Wednesday’s Ukraine referendum hot up.

Farage is keynote speaker at the Voor Nederland (VNL) event in Volendam, north of Amsterdam, in the evening. An expected 350 supporters will attend.

The referendum is on a treaty between the EU and the Netherlands which largely deals with trade and economic issues, although it also allows visa-free travel for Ukrainians in Europe.

It is the result of a new law in the Netherlands last year, meaning a cause that gets more than 300,000 signatures triggers an ‘advisory’ national vote. The treaty has already been passed by the Dutch government and others, and is in force.

But if more than 30% of people vote in the referendum, the Dutch government has promised to respond.

Farage, head of UKIP, is campaigning for a Brexit and has already played a role in the Dutch campaign, which is widely interpreted as expressing Eurosceptic sentiment.

In February, Farage recorded a video saying: ‘I wanna come and help and support…I’ve got everything crossed, because if you win your referendum – my goodness me – that’ll help in Britain too.’

He told The Sunday Times at the weekend: ‘If the Dutch vote decisively in a no direction, it will have an impact on the UK referendum.’

Last week some people behind the referendum caused outrage by admitting they really want it to pressure the relationship between the Netherlands and the EU. Arjan van Dixhoorn, chairman of Burgercomité EU, behind the referendum, admitted to NRC: ‘We don’t really care about Ukraine.’

In a late show of colours last week, Dutch prime minister Mark Rutte reassured voters that the Netherlands is against EU membership for Ukraine.

‘We think that Ukraine should have a good relationship with Europe and Russia,’ he told NU.nl. ‘And that would not be possible if it were part of the European Union.’

But Michiel van Hulten, of the Stem Voor Nederland yes campaign, said a no vote supports Russia: ‘The far left and far right are parroting the Russian position,’ he said. ‘I don’t know if it’s active manipulation, or they are useful idiots.’

Another yes supporter, Cees van der Sluis, 41 won €4,800 in public funds for a campaign filming people’s views in Ukraine itself, after enjoying a visit there for the Euro 2012 football championships.

‘This is a spark that can set off problems in the whole EU,’ he told DutchNews.nl. ‘Ukraine is the victim of this anti-EU initiative, and they don’t deserve it. The lack of public understanding is drastic.’