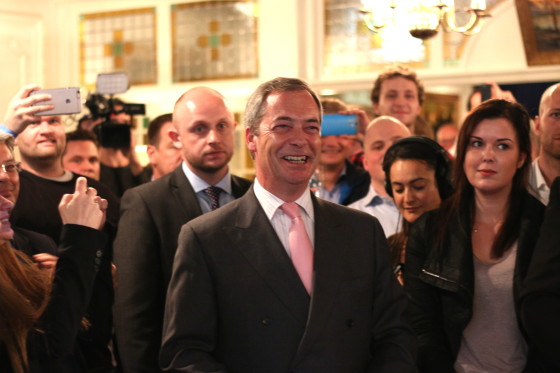 ‘Let’s celebrate the outbreak of democracy in this country, and let’s hope that it spreads like a rash across the rest of Europe,’ the leader of Britain’s anti-EU party UKIP told a gleeful crowd of anti-treaty campaigners in the town of Volendam on Monday night.

Nigel Farage was the keynote speaker at an event that drew around 300 supporters two days before the Dutch referendum on the EU’s treaty with Ukraine.

‘I’m not here to tell the Dutch how to vote,’ Farage told DutchNews.nl at the event. ‘But obviously I’m aligned. Everyone knows this isn’t really about a trade deal, it’s about the empire expanding.’

Dutch voters go to the polls on Wednesday to decide whether to accept or reject a treaty between the EU and Ukraine. The treaty deals mostly with trade and economic issues, but would also allow visa-free travel for Ukrainians in Europe.

Show of no confidence

The results of the referendum are not binding on the Dutch government. However, a successful no vote would serve as a barometer of public confidence in the EU, and could influence the coming Brexit referendum in June.

‘It’s a snapshot of how this country feels,’ Farage said. ‘If you vote no, that will have some real consequences. If in the course of the next three months your vote is the hors d’oeuvres, then our vote is the main course,’ he told the crowd.

The picture-postcard streets of Volendam may seem an unlikely location for an event like this, but Volendam and countless other small Dutch towns have for a long time been bastions of support for nationalist parties like Geert Wilders’ PVV.

‘It’s a mistake to paint this in terms of left/right politics. This crosses the whole spectrum,’ Farage told DutchNews.nl. ‘This is an exercise in democracy, and I hope people come out and grab it.’

The meeting was organised by splinter party Voor Nederland (VNL), formed by two former PVV parliamentarians who quit the party in 2014. One of them, Joram van Klaveren, was also a speaker at Tuesday’s meeting.

‘Ukraine is not a trustworthy partner,’ van Klaveren told the audience. ‘The money we’d spend on this is better spent in the Netherlands.’

Farage’s enthusiasm for stronger border controls struck a chord with the crowd. His declaration that Britain and the Netherlands are facing a ‘threat to our civilization through our misplaced compassion’ drew thunderous applause.

Farage didn’t speak much about Ukraine. ‘How many voters will have actually read the treaty? This vote is really a litmus test on the direction of the EU,’ he told DutchNews.nl.

Read also: The Ukraine referendum is cynical, manipulative and one we should boycott