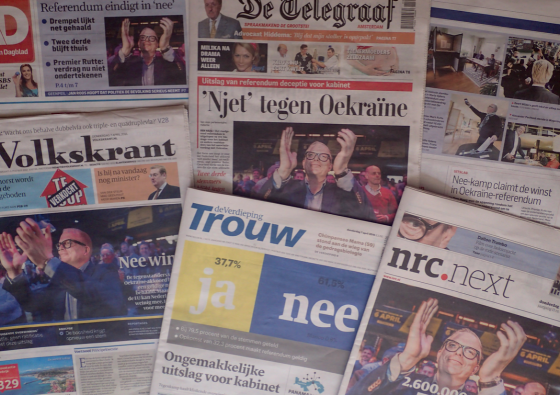 Wednesday night’s Ukraine treaty results dominate the front pages on Thursday, with the exception of the AD, which focuses instead on the result of blood tests on workers at a Dupont chemical works in Dordrecht.

The Volkskrant opens with the headline ‘Anger gets a voice’. In its analysis the paper says the referendum reveals yet again the ever-deepening divide in Dutch society.

‘The first group is not interested in stories about the advantages of international cooperation which so delight the higher educated and high earners. It’s the social segregation which divides the Netherlands in the national elections too: the political importance of education and lifestyle is growing apace.’

In the NRC, commentator Bas Heijne concludes that Wilders’ ‘patriotic spring’ hasn’t sprung quite as convincingly as the PVV leader had hoped . ‘The no vote is a protest vote, that much is clear, but it’s one we’re familiar with. It takes more involvement to cause a landslide or a lightning strike. And a higher turn-out,’ Heijne writes.

So did the referendum serve any purpose at all? Heijne thinks it did. ‘The political establishment, which has been largely unable to generate any enthusiasm, will now have to find new ways of connecting with the voters – it’s been said many times before but perhaps this time the message will be brought home.’

History in the making is an unpredictable process, Heijne concludes and perhaps the best thing to come out of this referendum is the fact that many people admitted to being unsure about what the future might bring; ‘a lesson in humility’ and  ‘a nice contrast with the iron-clad certainties of the self-proclaimed saviours of democracy. If the referendum has made more people realise this, it has served a purpose, as far as I’m concerned,’ he said.

‘Embarrassment is the key word for the Netherlands, at home in Europe and in the world,’ Trouw writes. ‘It’s not surprising that prime minister Rutte didn’t care to comment on the consequences for the treaty with Ukraine. It makes sense: the Netherlands in Europe is like a participant in an organised group tour to Florence who suddenly wants to change course to Napels,’ the paper writes.

‘Whatever the consequences of the no vote, the discussion today will be about the referendum law. The anti-referendum parties will be predictably vocal and much will be said about the 30% threshold which caused many people to stay at home.

‘Questions will also be asked about the ease with which organisers GeenPeil achieved the 300,000 signatures needed, and the way the referendum subsidies were used: the €50,000 loo rolls did not sit well with anyone,’ the paper writes.

‘Referendum or not, the Brussels machine will keep on turning and it will continue to do so,’ writes Elsevier commentator Jelte Wiersma. ‘It may temporarily slow it down a little but that is all. This will increase the cynicism and scepticism about the EU.

‘All this has done is show that the European Union is on its way to becoming a super state under German leadership at the expense of the nation state. Only a serious protest voiced by this cabinet can prevent this.’

‘Rutte will have the final word,’ according to the FD. ‘This referendum could become a new and toxic trauma for the Dutch political balance, as happened with the vote on the constitution in 2005. Then prime minister Jan Peter Balkenende interpreted the no vote as a no to the national anthem and the flag, upon which the Lisbon treaty was ratified via a normal parliamentary procedure.’

If that is what happens now, the chances of the referendum being adopted as a democratic asset will be nil, the paper wrote. And that is what the people in favour of the treaty and those who did not vote wanted in the first place. ‘It’s a risky strategy because it will alienate more people from politics.’

A proper referendum sees the cabinet and all political parties join the discussion with conviction. ‘In this case only D66, GroenLinks, PVV and SP did so. VVD, CDA and the Christian parties dragged their feet and gave the silent majority an excuse to turn away from the referendum. They deserve a second chance. The TTIP accord between the EU and the US could be the ideal opportunity’, the paper said.