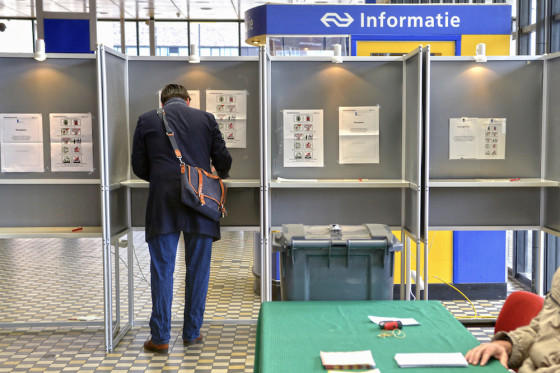 Ministers and party leaders have been urging voters to take part in Wednesday’s referendum on the EU’s treaty with Ukraine as opinion pollsters remain divided on whether or not the crucial 30% turnout will be achieved.

By 16.00 hours in the big cities, turnout was well down on the 2014 European elections, when just 37% of the electorate bothered to vote, according to figures collated by broadcaster Nos.

The result is advisory and only has legal weight if more than 30% of the electorate vote. Ministers have so far refused to say what they will do if a majority vote ‘no’, as opinion polls indicate.

The results on a district by district basis will begin to trickle in shortly after the polls close.

Although directly about the EU’s treaty of association with Ukraine, the referendum’s Eurosceptic backers see today’s event as a test of Dutch public opinion about the EU.

If the vote is a clear ‘no’ and the 30% limit is beaten soundly, prime minister Mark Rutte will be faced with an extremely difficult decision. The Netherlands is the only one of the 28 EU countries which have not ratified the treaty, although much of it came into effect in January this year.

The Netherlands currently holds the rotating presidency of the EU and a convincing ‘no’ vote will present an added problem, commentators say.