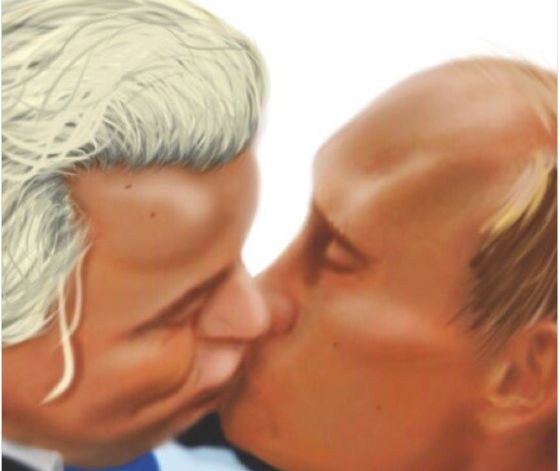 A poster featuring Geert Wilders and Vladimir Putin kissing has been banned from advertising hoardings at Dutch railway stations because it is considered too offensive.

The poster forms part of the pro-Ukraine campaign launched by the youth wing of the Labour party, which hopes to persuade people to vote in favour of the EU’s treaty with Ukraine on April 6.

However, the poster, and a similar one in which the two men are close together, has been deemed too offensive by ExterionMedia, which manages the station advertising.

‘The stations… are considered public space where everyone should feel comfortable,’ the NS said in a statement. ‘We have agreed with Exterion that posters should not be upsetting or offensive. It is up to them to take the decisions.’

Bart van Bruggen of the Jonge Socialisten said the current referendum campaigns are ‘far too sweet’. ‘This poster shows opponents of the treaty that they are lining up with Wilders and Putin.’

‘It would appear that the NS is more afraid of the KGB than the loss of freedom of speech,’ he said.

The banned poster is a parody on the famous photograph of Erich Honecker and Leonid Brezhnev kissing in 1979 which went on to become a piece of graffiti on the Berlin Wall entitled My God, Help Me to Survive This Deadly Love.