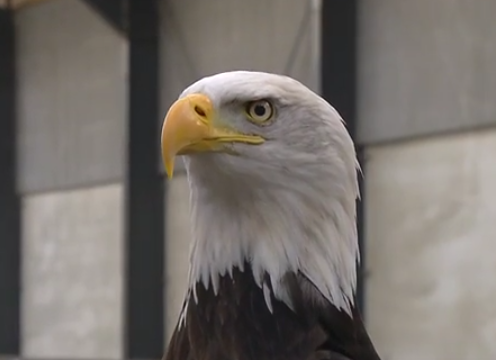 Dutch police are involved in training birds of prey to take out drones flown by criminals and terrorists.

The police, counter-terrorism agency NCTB and the ministries of justice and defence are working on a range of measures to combat drones, broadcaster Nos says.

Video footage released by the police at the weekend shows a bird of prey grabbing a drone in its talons and bringing it to the ground. The project is still in test phase but a spokesman said there was a ‘very real possibility’ that birds of prey could be used.

‘The bird sees the drone as prey and takes it to a safe place, a place where there are no other birds or people,’ project spokesman Marc Wiebes said. ‘That is what we are making use of in this project.’

‘Everyone can get hold of a drone, and that includes people who want to misuse them,’ police spokesman Michel Baeten told Nos. ‘It is a multifunctional piece of equipment and that means you can launch an attack with them as well.’

As well as birds of prey, officials are also looking into the use of high-tech detention systems and equipment which can remotely take over control of a drone. Another potential measure could be a drone which is programmed to fire at or capture an enemy drone.

A decision on whether or not to use eagles to take out drones will be made in a couple of months.