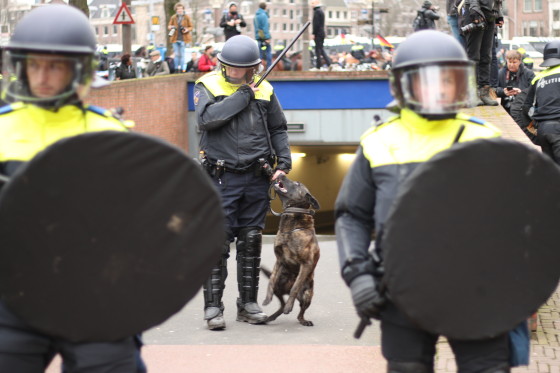 Battalions of riot police kept a protest organised by anti-Islam organisation Pegida at a
standstill in Amsterdam on Saturday afternoon, as tension mounted between Pegida supporters and anti-fascist groups.

In total, some 20 people were arrested, all of whom were released by Sunday morning.

The gathering coincided with similar protests organised by Pegida in several European cities on Saturday, including Dublin, London, and Prague.

The rally, originally planned to occur on a square in front of the city hall at Waterlooplein, was moved after police found a suspected explosive device at the original location.

According to a police press release, the device turned out to be a packet of fireworks. Police believe the ‘device’ was planted by counter-protestors to draw police attention and disrupt the protest.

The 100 or so Pegida supporters who turned up were corralled by police onto a nearby bridge and remained there until buses chartered from the local transport authority showed up to move them out of the city centre. The organisers had hoped around 500 people would turn up.

The group were heavily outnumbered by police, and by the left-wing opposition, who chanted anti-fascist slogans and displayed ‘Refugees Welcome’ banners.

Several arrests were made and police charged at the anti-fascist line on horseback as some protestors attempted to force their way towards Pegida’s position. According to the police, most of those arrests were of counter-protestors.

Pegida, whose name is a German acronym for ‘Patriotic Europeans Against the Islamisation of the West’ was formed in Dresden in 2014, and has since expanded to other European countries.

After several hours, and with both sides separated by police lines, the protest groups began to disperse around 5pm.