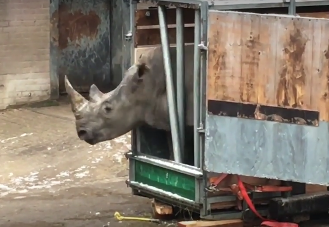 A rhino about to be transported from Emmen zoo to a new location tried to break out of its transport box, forcing zoo keepers to flee.

The rhino, one of the three being moved to the zoo’s new site on the outskirts of the town, was too strong for the wooden crate and repeatedly bashed against the metal bars, creating a large gap.

It is not clear when the film was taken, but Emmen zoo has been closed to the public since the beginning of this year while the animals are moved.

Once at the new zoo, the rhino is shown cautiously moving into its new enclosure. The new look zoo will open to the public in March.