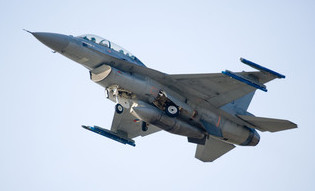 Dutch F16 fighter jets will take part in bombing raids over Syria, ministers agreed on Friday. ‘We can only prevent attacks if we remove IS’ safe havens in Iraq and Syria,’ prime minister Mark Rutte said at his weekly press conference.

The Netherlands currently has four F16 fighters flying missions over Iraq and their mission will now be extended to eastern Syria, Rutte said. In addition, the Netherlands will ‘intensify’ its support for the Iraqi army and Kurdish forces in Iraq Kurdistan.

‘The recent terrorist attacks in Paris make it clear that IS remains a threat to our security and our way of life,’ Rutte said. The start of peace talks in Geneva on Friday is a step in the right direction but the process, the prime minister said, remains fragile.

Justice minister Ard van Steur has admitted the decision may mean the Netherlands is more vulnerable to terrorist attacks. ‘We take this into account at the moment and we will maintain the same vigilance in the future,’ he told Nos.

Earlier this week, the coalition Labour party said it would no longer stand in the way of a decision to support the bombing. The Netherlands has been under pressure from France and the US to get involved.

However, the Dutch role in the wider region will stop at the end of June, when the Netherlands military campaign is due to end in July. Belgium will then take over from the Dutch but will confine its efforts to Iraq.