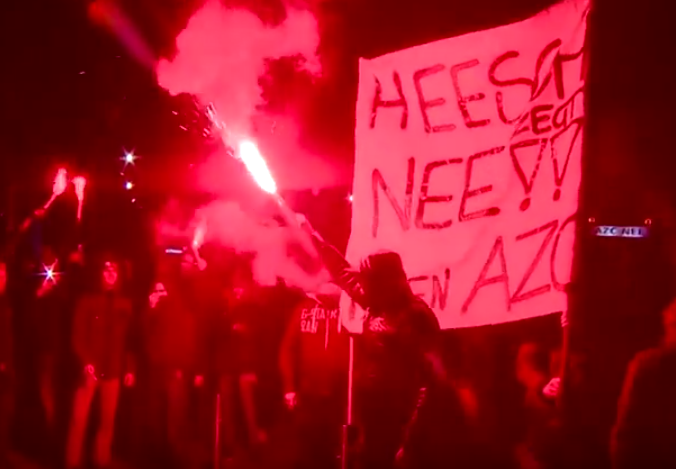 Riot police were drafted in to break up a demonstration by anti-refugee campaigners in the Brabant village of Heesch on Monday night after eggs and fireworks were hurled at the town hall.

Three people were arrested and council officials had to be evacuated from the building, where they were discussing measures to improve youth social services.

Last week, police removed two dead pigs from a site suggested as a potential refugee centre for 500 people close to the village. One pig was placed on top of a building, the other hung by a metal chain from a tree. Heesch, which is close to Oss, has a population of 12,000.

Local VVD party leader Jack van der Dussen told BNR radio most of the trouble makers came from elsewhere. ‘It started as a peaceful protest but then the radical group showed up and spoiled it,’ he said.

Harm Ruijs, who organised the protest, distanced himself from the violence but said he had not changed his standpoint. ‘Many people were here to show they are opposed to such a big centre. 500 refugees for 10 years in one location is too many,’ he said.

Home affairs minister Ronald Plasterk said in a statement: ‘Protesting is part of a democracy but violence damages the essence of our democratic country.’

In December, riot police fired warning shots in the town of Geldermalsen after protests about plans to build a refugee centre in the Gelderland town erupted into violence.

Police sealed off the town hall where the debate on the plans was taking place with fencing, but protesters, said to number about 100, pelted the building with bottles, bricks and fireworks. The meeting was abandoned on the advice of the police.

Council officials later reversed the decision to set up an asylum seekers centre for 1,500 people. Although officials originally said the dozen or so people arrested were all locals, many of them were actually from other towns.