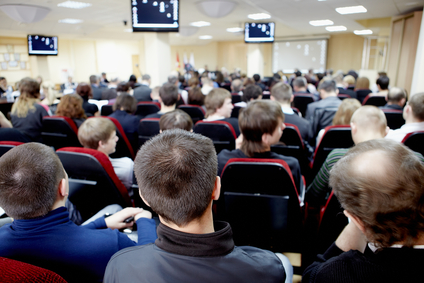 Some lectures at Dutch universities and hbo colleges are given in such bad English that no one can understand them, according to research by students’ union LSVB.

Almost 60% of students in an LSVB poll say they have been confronted with incomprehensible lecturers, the Telegraaf reports.

A large majority of the 269 students questioned criticised the level of English of lecturers and professors and said they learned less from bad English lectures than those given in Dutch.

‘This is a potential danger for the quality of education,’ LSVB chairman Stefan Wirken told the paper.

Dutch universities and colleges have been introducing more and more English into their degree courses in an effort to attract international students and prepare Dutch students for an international career.

‘Internationalisation can have added value but should not be the aim in itself,’ said Wirken. ‘There are more English degree courses but the standard of the lecturers’ English is not improving.’

Delft University student Niels de Boer told the Telegraaf half his lectures are in English. ‘Some are good, but we have a French teacher with an awful accent – so bad you don’t understand the lecture. We also have a couple of Dutch lecturers whose English is terrible,’ he said. ‘It’s fine by me to attend lectures in English but the standard really has to go up.’

The LSVB is taking part in a round table session with MPs, university staff and language experts on Wednesday to discuss the ‘totalitarian’ introduction of English at Dutch higher education institutions.

The experts and the student body both want universities to keep to the letter of the law on higher education which says courses and exams should be in Dutch unless there is a very good reason to deviate from this, the Telegraaf says.

Are you an international or a Dutch student and does this ring a bell. We are interested in your experiences. Use the comments form below or email editor@dutchnews.nl