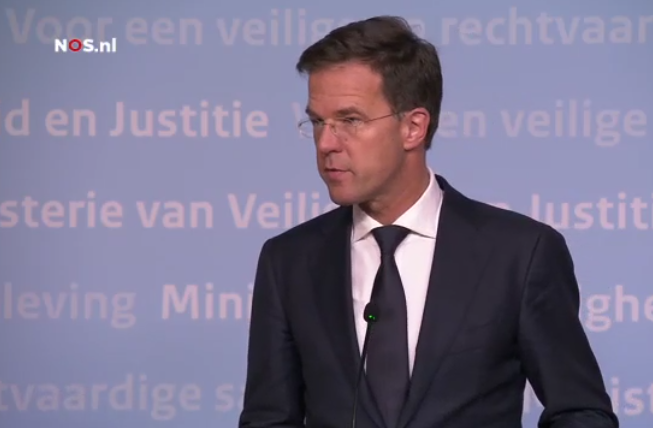 The Netherlands is at war with terrorist organisation IS, Dutch prime minister Mark Rutte said on Saturday in the wake of the deadly attacks in Paris.

‘We are dealing with an armed conflict in Syria and Iraq,’ Rutte said. ‘ISIS is our enemy and that is why we are at war. We are not at war with a religion or Islam and that is the way it is.’

The terrorists have one aim: to destabilise our western civilisation, Rutte said. ‘The best answer we can give these barbarians is not to become divided… Our values and our rule of law are stronger than the fanaticism of a small group.’

Describing the attacks as cold and cowardly, Rutte said the Netherlands has sent its condolences to the people of France and offered all help possible to the French authorities.

The Netherlands stands together with France, and the flags on all government buildings will be at half-mast on Monday, the prime minister said.

Rutte also said that all security organisations in the Netherlands are at a ‘higher’ stage of alert following the shootings and suicide bomb blasts. Border controls are also being tightened up, particularly for traffic heading to and from Paris.

The same applies to airports and train stations, Rutte said.

The prime minister was speaking after an emergency session of ministers and security officials to discuss the Dutch response to the attacks, which left at least 128 people dead.

Events, such as the Sinterklaas parades this weekend, can go ahead as normal, the prime minister said. However the police will be stepping up surveillance. Both ‘visible and invisible measures’ will be taken, Rutte said.

The ministers of security, defence, foreign policy and home affairs were also at Saturday morning’s meeting.

The official terror threat in the Netherlands remains ‘substantial’, which means security experts think there is a real threat of an attack.

Nos says security has also been stepped up at refugee centres around the country because of concerns they could be the subject of revenge attacks by right-wing extremists.

Listen to the prime minister’s speech