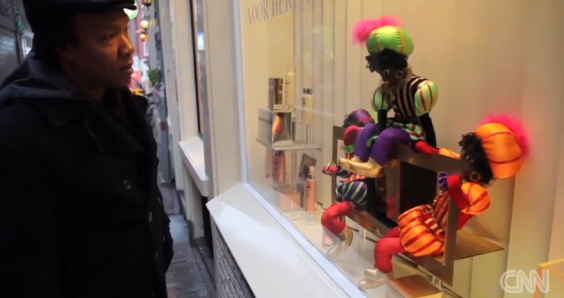 A week before the Sinterklaas festivities on December 5, global news channel CNN is digging into the Zwarte Piet controversy with a short documentary.

Blackface was made by Oscar-winning documentary maker Roger Ross Williams who said his friends in America had been shocked the first time they saw a photograph of Sinterklaas’ helper.

‘I think many people will see it and find it scandalous,’ Ross Williams is quoted as saying by the NRC. ‘Other countries will pressure the Netherlands to end the practice.’

The film was shown for the first time at Amsterdam University on Wednesday evening, an event attended by students, anti-Piet activists, American nationals and people of Surinamese origin, the paper says.

The film, which runs for 15 minutes, is not meant to be a journalistic report. ‘This is a report of my personal experiences with Zwarte Piet,’ Williams said. ‘How can I be objective about it?

The NRC says the film is ‘remarkably’ funny even though Williams has already learned that the Dutch do not consider the subject amusing.

‘When I said Zwarte Piet was Holland’s dirty little secret in the Telegraaf, I got a lot of hate mail,’ he said. ‘I thought, if Zwarte Piet is not racist, why are you saying racist things to me?’

Williams will be taking part in the RTL Late Night with Humberto Tan on Monday evening. The documentary will go live on CNN on Sunday.