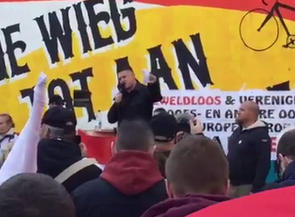 At least six of the 10 people arrested during a demonstration by the anti-Islam Pegida movement in The Hague on Saturday face criminal charges, the public prosecution department said on Monday.

One of the 10 people remains in jail. Two have been released without charge and the investigation into two others is continuing, the department said in a statement.

The six will face a range of charges, including public disorder offences, resisting arrest, using violence against a horse and insulting behaviour. The arrests came after fighting broke out with members of a counter-demonstration, despite the efforts of police to keep them separate.

In addition, the department is looking into the speeches made during the rally, particularly that by Raffie Chohan, who is a visible and vocal anti-Islam campaigner, news agency ANP says.

During her speech Chohan spoke of the ‘massive inbreeding’ brought by Islamic culture and said this inflicts ‘great damage on their intellectual and mental capacity’ making Muslims unsuitable for work, the Volkskrant reports.

The Utrecht demonstration, attended by around 200 people, was the first by the Dutch branch of the German movement and was organised to protest at the arrival of asylum seekers. Pegida founder Lutz Bachmann was among the demonstrators.

According to the Huffington Post, British far-right activist Tommy Robinson was also among the speakers and was photographed together with Bachmann.