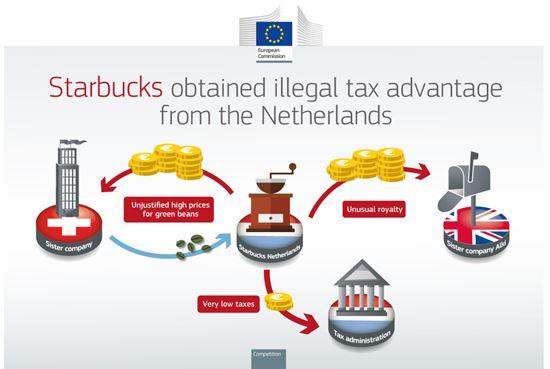 The tax agreement struck between the Netherlands and US coffee company Starbucks is illegal, the European Commission said on Wednesday.

‘They are illegal. I hope that, with today’s decisions, this message will be heard by member state governments and companies alike. All companies, big or small, multinational or not, should pay their fair share of tax.’

The commission has ordered the Netherlands to recover the unpaid tax from Starbucks, which it puts at between €20m and €30m since 2009.

The Dutch cabinet said in a reaction that it is ‘surprised’ by the commission’s ruling. ‘The cabinet will study the ruling and inform parliament about follow-up measures within a few weeks,’ the finance ministry said.

The Netherlands has never denied reaching a tax agreement with Starbucks, but says the deal is in line with international agreements.

Starbucks Manufacturing, based in the Netherlands, is the only coffee roasting company in the Starbucks group in Europe. It sells and distributes roasted coffee and coffee-related products to Starbucks outlets in Europe, the Middle East and Africa.

This company went on to pay a very substantial royalty to a Britain-based company for its coffee roasting know-how which, the commission said, did not ‘adequately reflect market value’.

‘The existence and level of the royalty means that a large part of its taxable profits are unduly shifted to Alki, which is neither liable to pay corporate tax in the UK nor in the Netherlands,’ the commission said.

The Netherlands has long been under fire for its generous programme of tax treaties. The Financieele Dagblad said earlier this year the Dutch tax office has made 14,619 advance tax agreements with international companies since 1991.