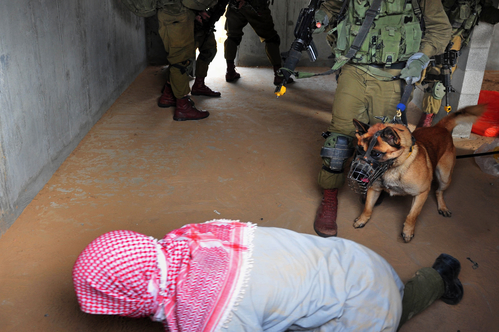 The Netherlands is supplying dogs to the Israeli army which are used against Palestinians in the Occupied Territories, the NRC reports on Monday, based on its own research.

The paper says the supply of dogs has been going on for several years, despite an EU ruling on the refusal of export licences for the shipment of strategic goods such as pistols and camouflage paint to Israel.

‘Service dogs’ do not fall under the same heading for exports, but the paper questions this because the Dutch police and defence ministry classify these dogs as ‘means to violence’ just like pepper spray and fire arms.

Exact export figures are not available because Dutch customs does not make a distinction between dogs trained to attack people and pets, the NRC says. Nor will the Israeli army provide information about the country of origin of its dogs.

However, the Brabant breeder Four Winds K9 told the NRC it is the main supplier of dogs to the Israeli army, and has been sending many dogs every year for more than 23 years.

According to human rights lawyer Liesbeth Zegveld, it is ‘absurd’ to supply dogs to Israel. The fact that these dogs are not mentioned in the law on weapons and munition or in the EU ruling on exports to Israel is irrelevant, she told the paper.

‘The dogs are used by Israel as weapons against Palestinians and their export must be banned,’ she said.

MP Wassila Hachchi of the left-wing liberal party D66 will question foreign affairs minister Bert Koenders about the dogs on Monday. ‘It is common sense that service dogs fall under the rules on strategic goods. I want to know how the minister will prevent these exports,’ she told the paper.

On Thursday, the Palestinian president Mahmoud Abbas, prime minister Rami Hamdallah and foreign minister Riyad Al-Malki will be in the Netherlands for talks on cooperation between the two countries.