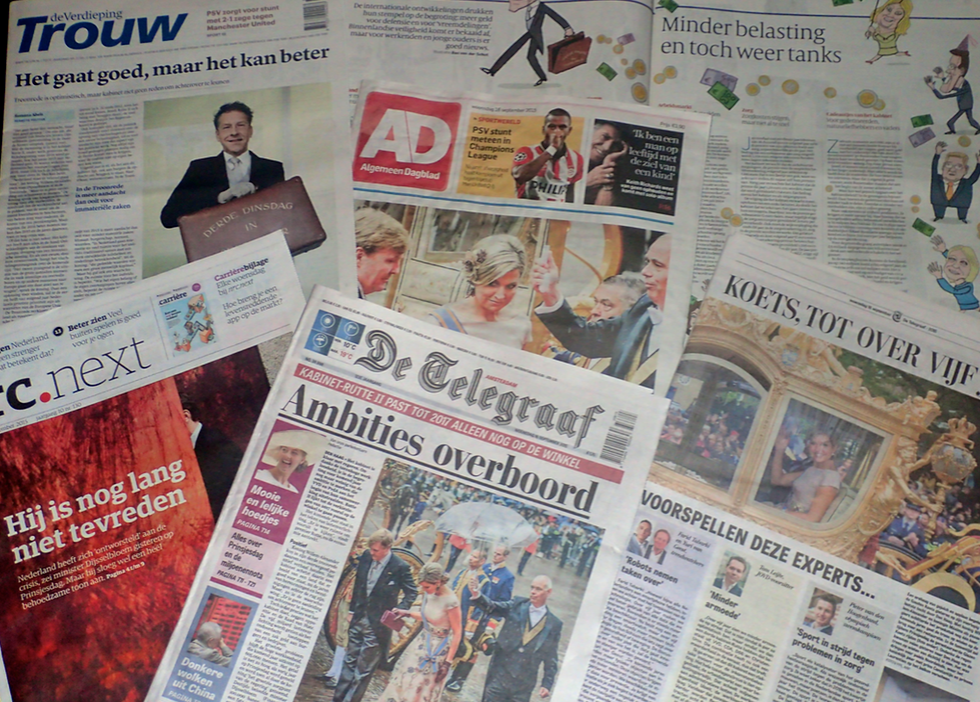 Pictures of queen Maxima and finance minister Jeroen Dijsselbloem dominate the front pages the day after the presentation of the government’s 2016 spending plans, but the Volkskrant opens instead with the refugee crisis in Hungary.

The Financieele Dagblad says in its editorial the cabinet has been slow in executing the reforms it agreed upon in such haste and has underestimated the difficulties that are now being encountered in their implementation.

The paper calls it ‘illusion politics’. It cites the problems surrounding the personal health budgets and the failure of the tax office to bring its ICT system up to date so it can cope with fiscal changes.

‘It’s painful to conclude that the feasibility of the reforms has turned out to be an afterthought,’ the paper writes. FD hopes that with any future reforms – regarding pensions or climate – the ‘less sexy’ work of implementation is not neglected.

The Telegraaf writes that the king’s speech started out with the good news and saved the themes of terrorism and refugees until last.

‘That shows what the real concern of the coalition parties Labour and VVD is. They want to curry favour with the voters as the elections of 2017 are getting nearer. That is why, after years of cutbacks and reform, the cabinet is doling out presents even though it means increased borrowing,’ the paper said. In other words, the cabinet will be treading water for the next two years.

Elsevier’s political correspondent Syp Wynia agrees with the Telegraaf: the cabinet is hoping the economy will recover and is keeping its fingers crossed until the elections of 2017. But it is doing so at its peril,  he states.

He warns that although the budget deficit is now less than 3%, the economic upturn is so fragile that it doesn’t need much to send it soaring again. ‘Moreover, the European deal is that the budget deficit should go down to zero.’ The government’s spending spree in the sight of lower gas revenues is not ‘keeping the ship on course’ but making it ‘zig zag’, Wynia writes.

NRC Next writes that the cabinet went a long way to avoid appearing ‘triumphalist’. It quotes finance minister Jeroen Dijsselbloem who said: ‘The Dutch are googling ‘rise’ again instead of ‘severence pay’.

But the finance minister followed this up by dire warnings about the implosion of the Chinese economy and its impact on Europe, the expected interest rise in the United States and the geo-political dangers that are threatening the economy. ‘As if to underline the need for caution, he used the attaché case that once belonged to the most frugal of post war finance minister Lieftinck,’ the paper points out.