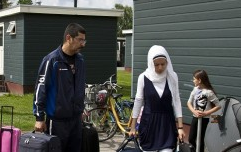 So far this year, 25,000 asylum seekers have come to the Netherlands, of whom 8,000 were family members joining people already settled, the national statistics office CBS said on Monday.

In most cases, adult men are joined later by their wives and children, the CBS said.

Despite the rise in numbers, there is still a long way to go to reach 1994’s peak of 53,000 asylum requests, the CBS points out. Most of those refugees came from the former Yugoslavia, which had been torn apart by civil war.

Meanwhile, local broadcaster RTV-Noord reports that some 20 teenage Syrian girls who were in arranged marriages have recently arrived at the Ter Apel refugee registration centre.

The broadcaster bases its claims on IND documents. Two of the girls are 13 and two others 14. One is 15 and married to a man of 38, the documents show.

Last year 34 teenagers in arranged marriages came to the Netherlands as refugees, most of whom are no longer minors.

The Netherlands recognises marriages involving young teenagers as long as they are officially registered in the country of origin. However, campaigners criticise this position. ‘These girls need help,’ one social worker told RTV Noord.