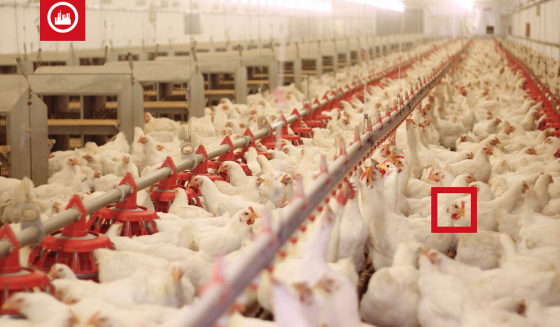 Dutch banks have invested millions of euros in a massive chicken farm in Ukraine which is competing with Dutch poultry farms, the Volkskrant reports on Monday.

The Ukraine farm, Myronivsky Hluboproduct (MHP) is owned by one of Ukraine’s richest men and kills and processes 332 million chickens a year, the paper says. This is roughly three-quarters of the Netherlands’ total production of chicken.

The paper bases its claims on  research by SOMO, the centre for research of multinational corporations. SOMO’s new report on MHP, titled Chicken Run, shows the extent of Dutch involvement in the project.

For example, both Rabobank and ING have invested in the plant and, the Volkskrant says, the involvement of Rabobank is particularly significant because of its ties to the Dutch farming community.

In addition, Rabobank has committed itself to improving animal welfare in factory farms and the rules in Ukraine are much less strict than in the Netherlands, the paper states.

Rabobank told the Volkskrant it had no indications that MHP is breaking national laws and declined to comment on the size of its investment.

Dutch agribusiness firms are also involved in the Ukraine project, the report states.

‘Furthermore, MHP has sourced technological equipment for the Vinnytsia complex from a range of mostly Dutch suppliers,’ it said. ‘In several cases these companies have received export credit insurances from Atradius DSB. Since the opening of the EU market for Ukrainian poultry, the Netherlands has accounted for the majority of EU imports of MHP’s products.’

Ukraine is also home to a massive battery chicken farm which has 23 million hens. Efforts last year to have egg imports banned from battery farms in Ukraine failed.