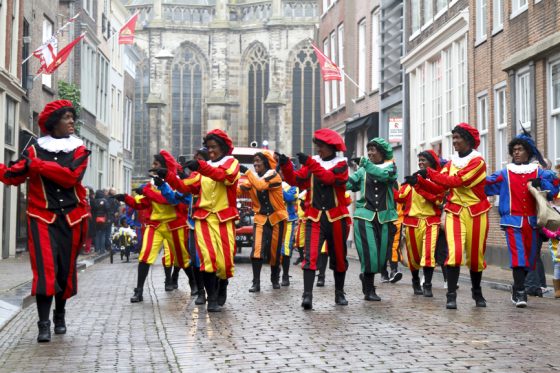 The classic character of Zwarte Piet, with blackface make-up, is no longer welcome at any primary schools in The Hague, the AD said on Thursday.

This makes the city the first in the Netherlands to agree to phase out Sinterklaas’s servant’s trademark characteristics, which opponents say are racist stereotypes, the paper said.

‘Some of our pupils do not feel comfortable during the Sinterklaas celebrations because of Zwarte Piet,’ Gerard van Drielen, head of the Christelijk Onderwijs Haaglanden school group told the paper.

All school heads have agreed to make the changes, which will see Piet lose his red lips, curly hair, earrings and black skin. Nor will he appear as a servant, the paper said.

Even small independent schools have committed themselves to the new policy, Van Drielen said. Traditional Piets will be phased out over a three-year period and it is up to schools themselves to decide how to do this.

Local and national populist politicians condemned the move as ‘political correctness gone mad’ while others said an age old Dutch tradition had been killed off. The AD’s The Hague editorial team said it had been phoned by angry parents and one person reported mothers had been in tears in a school playground.

In Amsterdam and Utrecht some schools have ditched the traditional Piet character but on a voluntary basis.

In August, the Bijenkorf department store group said it is replacing the traditional automated climbing Piets which decorate its main halls every Sinterklaas with golden versions.

The store group said it is making the change because the new golden Piets fit better with the Bijenkorf’s upmarket image and not because of the ongoing debate about the future of Sinterklaas’ helper.

A UN committee said at the end of last month the Dutch government should actively work to change the features of Zwarte Piet which reflect negative stereotypes.

The Committee on the Elimination of Racial Discrimination said in a new report on the Netherlands that even a ‘deeply rooted cultural tradition does not justify discriminatory practices and stereotypes’.