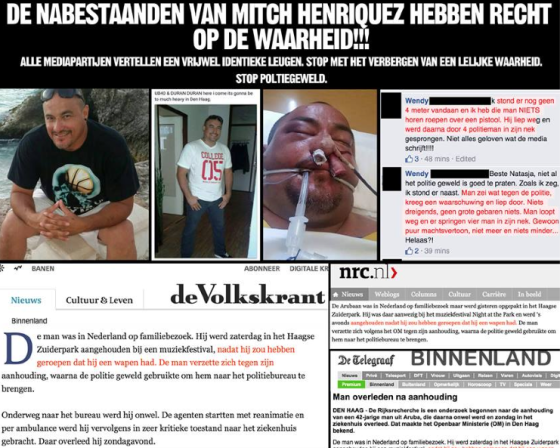 Aruban holidaymaker Mitch Henriquez, who died in police custody at the weekend, was probably killed by a lack of oxygen and this was most likely caused by the police, the public prosecution department said on Wednesday afternoon.

The Hague’s prosecution chief, Kitty Nooy, said in a statement ‘no other explanations have been found for the lack of oxygen’. ‘No natural causes of death were found’ and Henriquez had not been using drugs and was not drunk, Nooy said.

Mitch Henriquez died in hospital a day after being thrown to the ground and bundled, apparently unconscious, into a police van after an open air concert by UB40. He had reportedly been shouting that he had a weapon.

The public prosecution department initially claimed Henriquez became unwell in the back of the police vehicle but retracted that statement when the videos showing him slumped on the ground and being dragged to the police van were placed online.

The five police officers involved in the arrest have been suspended and are official suspects in Henriquez’ death, police chief Paul van Musscher told a news conference.

The news had come as a tremendous shock to the police, Van Musscher said. He said he assumed the police intervention had been made with the best of intentions but that ‘something went really wrong’.

Mayor Jozias van Aartsen said the death of Henriquez, who was visiting family, was ‘tragic and shocking’.

‘The investigation must be independent and carried out extremely carefully so we can get all the facts and decide what should be done with the police officers concerned,’ the minister told broadcaster Nos.

He also appealed for calm following two days of disturbances in The Hague.