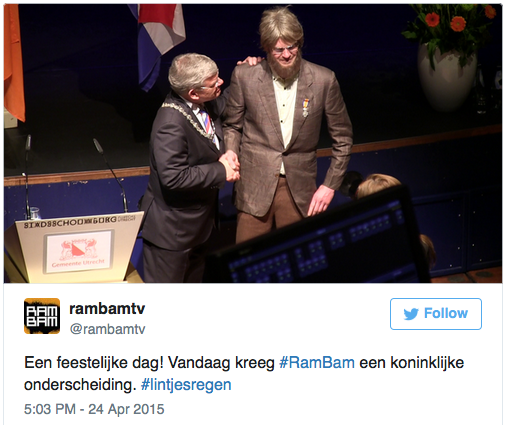 Pranksters from a Dutch consumer issues television show managed to get themselves awarded an honour in the king’s birthday list, for a charity which does not exist.

One of the crew even turned up to collect the honour from the mayor of Utrecht in a fake beard, and got away with it.

Presenter Jelte Sondij said the team wanted to see how many checks are made when deciding who should be awarded an honour. ‘We nominated a real person for an honour, with their agreement,’ he told the Telegraaf. ‘Then we made up a cv full of charities centred on dachshunds and ecological gardens.’

The nomination also required five references, three of which were from non-exisiting people.’The two who did exist were not phoned or emailed and no-one checked on the projects either,’ Sondij told the paper. ‘If they had googled them, they would have found out in a couple of minutes it was all nonsense.’

Nominations are supposed to be checked by the local mayor, are then sent to the king’s commissioner in the province for approval, they then go to a national committee, are approved by a minister and then signed by the king.

At the beginning of this month, the team were told that their nominee had been approved and would be made a member of the Order of Oranje Nassau. On Friday, Sondij went to Utrecht city hall to collect the award wearing a fake beard. ‘No-one asked me to prove who I was,’ he said.

Utrecht’s mayor Jan van Zanen said in a reaction he regretted the fact that a ‘wrongful award’ had spoiled ‘this special moment’. Sondij has since returned the medal.