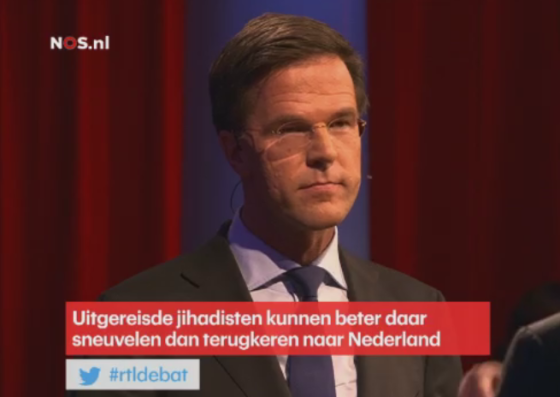 Prime minister Mark Rutte made controversial comments about jihadis being better dead than back in the Netherlands in the context of the election campaign and as prime minister, he said after Friday’s cabinet meeting.

Rutte said during a television debate with other party leaders on Thursday night he agreed it would be better if Dutch jihadis who travel to Syria died there rather than return to the Netherlands.

‘I think the same, whatever role I am in,’ the prime minister said on Friday afternoon. ‘You cannot differentiate.’

‘If I am asked for my position on a statement which says it is better to die than come back here then I have to agree,’ Rutte said.

Labour ministers in the coalition government have said they do not agree with the prime minister and distanced themselves from the comments.

Deputy prime minister Lodewijk Assscher said earlier that such statements can be made because it was ‘very clear’ Rutte was speaking as the leader of the right-wing Liberal party VVD, not as prime minister.

‘But I do not think as a cabinet you should hope people die,’ he said, adding that those who commit crimes should be taken to court.

During the debate, D66 leader Alexander Pechtold said he was shocked by the prime minister’s position. ‘I think as prime minister you should put the rule of law first, but you are saying “go and die in the desert rather than face your responsibilities in court”,’ Pechtold said.

Rutte retaliated by saying that ‘people who go there know what they are part of’. ‘The only aim is to kill as many people as possible. Those people will soon be back to carry out attacks here as well. As prime minister, I am here to protect our people.’