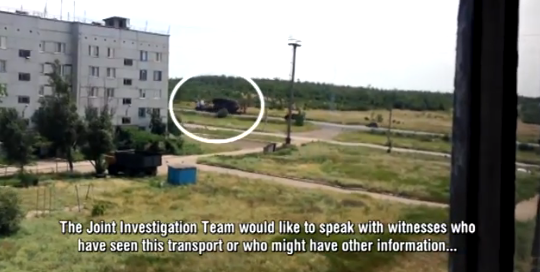 Dutch investigators looking into the MH17plane disaster on July 17, 2014 on Monday launched an appeal for help in tracing witnesses to a possible BUK missile attack on the plane.

The appeal includes video footage showing a BUK missile system being moved through eastern Ukraine on a low loader Volvo truck on July 17 and 18 and parts of secretly recorded phone conversations, the public prosecution department, which is coordinating the investigation, said.

‘We are looking for witnesses who have seen BUK crew members or have more information about the identity of those involved in ordering and launching the BUK,’ the statement said. People who are concerned about their safety will be offered ‘various protective measures.’

Tapped phone conversations indicate pro-Russian separatists in eastern Ukraine had set up BUK anti-aircraft missiles prior to the MH17 plane crash and that the rebels withdrew in the wake of the crash, first to rebel-held parts of Ukraine and then to Russia, the department said.

The phone conversations, recorded by the Ukrainian secret service SBU, have been released in order to encourage witnesses to come forward.

‘Yesterday was a total mess. I have nothing to say about it,’ one separatist was recorded as saying the day after MH17 was shot down, killing all 298 people on board.

Two of the conversations mention the weapons system by name and discuss where it is to be placed.

The appeal for witnesses does not mean the department has concluded a missile attack is the only likely cause of the crash and is just one of number of scenarios being looked at, the department statement said.