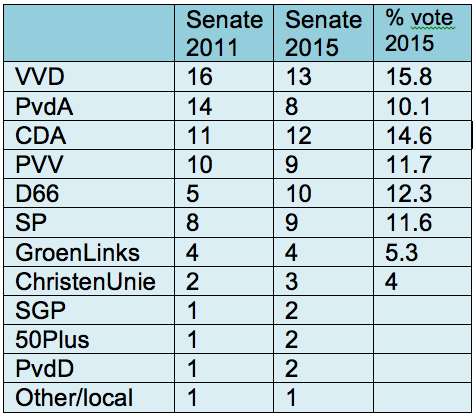 With six political parties all winning between 10% and 16% of the vote in the provincial elections, the Dutch political landscape has never been so divided.

The results of the vote, which saw the VVD remain the biggest party, will also make it difficult for the cabinet to put together a new alliance to ensure controversial legislation gets passed in the senate.

VVD parliamentary leader Halbe Zijlstra said he could imagine a situation in which the government works with different coalitions. With six parties so close together in the election, ‘none of them can avoid taking responsibility,’ he said. ‘The bottom line is that the country has to be governed.’

Provincial councillors vote for the 75 senators in May and the ruling coalition is likely to control just 21 seats.

Both D66 and the Christian Democrats, who came third and second in the vote, made it clear on Wednesday night they want to see tax cuts in return for support. Smaller parties, such as GroenLinks and the pro-animal PvdD, also said they will be constructive but not uncritical.

D66 leader Alexander Pechtold said plans need to be made before the summer to ensure a proper budget can be presented to parliament in September. ‘[Prime minister Mark] Rutte, take over the leadership and sort it out,’ Pechtold is quoted as saying by broadcaster Nos.

The Financieele Dagblad says in its editorial that Dutch politics have become so splintered the country needs to reform its political system to remain governable.

The biggest loser of the night was the ruling Labour party. The social democrats are likely to have just eight seats in the senate from May, a loss of six. ‘Our battle continues,’ a defiant Labour leader Diederik Samsom told supporters in Amsterdam. ‘We lost but we have not been beaten.’

Geert Wilders’ anti-Islam PVV failed to capitalise on the rise of radical Islam and lost support for the fourth election in a row. The PVV will have nine seats in the new-look senate, a loss of one, having captured around 11% of the vote.

The Socialists dominate in Groningen, where the earthquakes and natural gas extraction were the main issue in the campaign. D66 narrowly beat the VVD to become the biggest party in Utrecht.