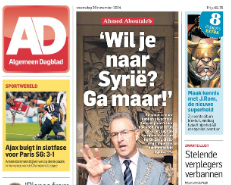 Rotterdam’s mayor Ahmed Aboutaleb has been heralded by London’s mayor Boris Johnson for his outspoken comments about would-be jihadis.

Aboutaleb told television show Nieuwsuur on the day of the Charlie Hebdo killings that people who cannot accept humourists making a newspaper should ‘rot op’. This was widely translated in the British media as a headline-making ‘fuck off’.

‘And my hero – the man who got straight to the point – was the mayor of Rotterdam, Ahmed Aboutaleb, himself a Muslim,’ Johnson wrote in a column in the Telegraph newspaper.

‘That is the voice of the Enlightenment, of Voltaire,’ Johnson wrote. ‘We can and will protect this country against these jihadist thugs. We will bug them and monitor them and arrest them and prosecute them and jail them.

‘But if we are going to win the struggle for the minds of these young people, then that is the kind of voice we need to hear – and it needs above all to be a Muslim voice.’

The right-wing Daily Mail picked up the story and its coverage soon gathered over 3,000 comments, nearly all in favour of Aboutaleb’s stance. Some suggested he should move to Britain and become prime minister there.

‘Good for him. We need more politicians like him that don’t hide behind spin all the time,’ read one comment. ‘Wish he was in charge of the British Labour party,’ said another.

Aboutaleb, himself a Muslim, is known for his outspoken stance on radical Islam. In November he broke with the Labour party line and said Dutch nationals who have decided they want to travel to Syria to join Islamic militias should be allowed to go but should be banned from coming back to the Netherlands.

‘I want to make sure those who are considering going to Syria know exactly what is at risk,’ Aboutaleb told the AD. ‘If you think this society is depraved, then go. But there is no way back. Hand over your passport and risk getting bombed.’