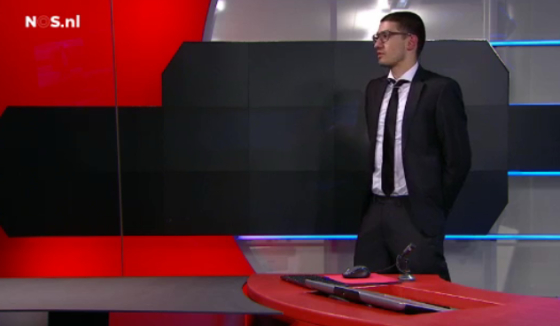 The Dutch papers on Friday are dominated by Thursday night’s bizarre events at the studios of public broadcaster Nos, when a 19-year-old chemistry student forced his way in with a fake gun, demanding airtime.

In particular, many questions are being asked about security at the Nos headquarters and at Dutch media organisations in general. Many broadcasters are concentrated in the Media Park in Hilversum, where last night’s incident took place.

‘The bizarre hostage taking action by a mentally ill boy last night at the Nos building makes painfully clear that much is wrong with the security of news organisations, including those in the Netherlands,’ writes the Telegraaf.

‘After the bloody events at Charlie Hebdo, a disturbed man managed to gain entrance to the Nos newsroom relatively simply… Although this seems to be the action of one man, the Nos must take a good, hard look at itself. The security of its employees and buildings stinks,’ the paper says.

The Telegraaf concludes that in order to ensure the open character of our society ‘the lesson that must be learnt from this cowardly deed is that those responsible should immediately provide better protection for all media buildings.’

In the AD, Richard Franken, the director of security firm Trigion, is quoted as saying that ‘every day thousands of workers and guests visit the Media Park. You have to find the right balance. It will never be 100% safe and you don’t want to turn the building into a Fort Knox.’ Trigion is responsible for security at the Media Park.

Hilversum local council, Nos and the police are in talks about the security of the media buildings, the paper reports.

TV critic Jean-Pierre Geelen in the Volkskrant looks at the way Nos handled the situation in terms of information to viewers.

‘Confusion reigned in people’s homes. Television screens displayed the cryptic message ‘due to circumstances there will be no news bulletin’ for an hour. It turned out that the broadcaster was itself the subject of the news and yet was unable to give out any information via radio, Teletext, website or app,’ Geelen writes.

‘This news will go around the world,’ Geelen quotes journalist Ron Fresen as saying several times, amid the endless repeats of the moment the man was overpowered by police.

‘But although Nos experienced an eventful hour, it has little reason to be so proud of itself,’ Geelen concludes.

Hans Beerenkamp in NRC says the media can learn several lessons from the events at the Media Park.

‘Although NPO chairman Henk Hagoort said proudly that the three public tv stations were back on air in a matter of 70 minutes … that would not have happened if not for the back-up facility in The Hague put in place last year,’ he says.

‘But should a real national calamity take place (and last night didn’t qualify as such) the public broadcasters can’t afford to say absolutely nothing for an hour. Better back-up is needed.’

In addition, it is no use to try to keep a lid on information, says Beerenkamp. ‘This is the era of Twitter. It wasn’t a good move on the part of the Nos to forbid its journalists to use the social media to report the news.

Another lesson is that the fear of terrorism has probably made more victims in the Netherlands than terrorism itself, he says. For everyone’s safety it would be better to stop the hype rather than install more electric barriers,’ Beerenkamp concludes.