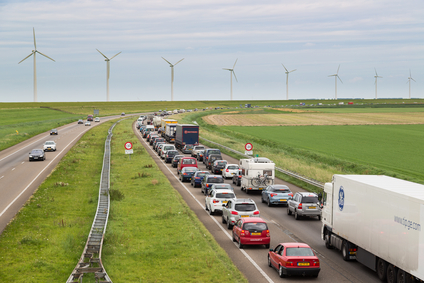 Ministers have approved the large-scale testing of self-driving cars and trucks on public roads in the Netherlands arguing the technology could cut jams, improve road safety and reduce pollution.

The cabinet wants the Netherlands to take a ‘leading role’ in the development of self-driving cars and systems to allow vehicles to communicate with each other, the infrastructure ministry said in a statement.

Large-scale testing is planned to start in the summer, if parliament approves changes to current legislation, a ministry spokeswoman told news agency AFP.

The Dutch system does not involve doing away with drivers altogether, but with getting cars to work together instead.

‘Vehicles which communicate with each other and accelerate or break in unison will contribute to smoother traffic flow,’ the ministry statement said. ‘The vehicles can travel more closely together and use the available road space more efficiently.’

A number of companies and institutes have already expressed an interest in taking part in the trials, the ministry said. For example, the TNO research institute is working with DAF, Rotterdam’s port authority and the transport industry lobby group TLN to develop self-driving lorries.

A number of other trials of self-driving cars are underway worldwide. Google, for example, is working on its own robot car project, unveiling a prototype at the end of last year.