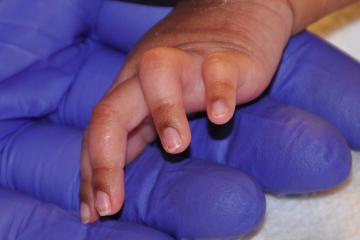 The baby girl found abandoned in an underground rubbish container in the Amsterdam district of Nieuw West in the early hours of Sunday morning had been placed in a plastic bag, police say. The baby, thought to be between 10 and 20 days old, was found after a passerby heard her crying and called the emergency services.

Officials are now trying track down her parents. The baby had been well cared for until she was dumped and was wearing a white vest, a grey shirt and white trousers when she was found.

Officials are hopeful that two unusual physical traits may help identify the child. Both her ring fingers are permanently bent and she has a large patch of blueish skin on her buttocks.

The child, described as ‘lightly coloured’ by officials, is also thought to have had the heel prick test, which is part of the routine neonatal screening process for newborns.

The baby has since left hospital and is being cared for in a foster home. The case was the subject of special broadcast by television crime show Opsporing Verzocht on Tuesday night.

It is not yet known if the broadcast has resulted in the baby and her parents being identified.