A new exhibition and a new book bring together a wealth of old and new images of Dutch modernist painter Piet Mondrian.

Silly, flirty, a bon viveur are not descriptions that would normally be associated with modernist painter Piet Mondrian (1872-1944), more commonly shown in schoolmasterly poses in front of his famous primary-coloured grid paintings. But the Fotomuseum Den Haag’s newest exhibition Strike a Pose | Mondrian and Photography, which opened on Saturday, has photographic evidence that Mondrian was far more fun than was once believed.

The exhibition of 70 photographs includes images that have never before been shared with the public. Drawn from around 50 international collections, the images are displayed chronologically, from Mondrian as a teenager in the 1880s posing grumpily with his siblings, to a series of post-humous photographs of his New York studio taken by fellow abstract artist and dear friend Harry Holtzman.

‘People have a very clear image of Mondrian, that he’s kind of rigid, always neatly in his suit, coiffured and very stiff, but he was actually a very sociable, fun and humoristic human being,’ explains Caro Verbeek, Mondrian curator at the Kunstmuseum The Hague, sister museum and neighbour to the Fotomuseum and home to the world’s largest collection of Mondrians. 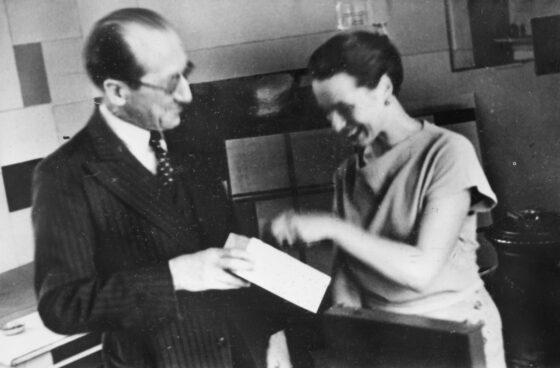 Verbeek, who is giving DutchNews.nl a preview of the exhibition, points to a blurred snapshot of Mondrian with Gwendolyn Lux-Wickerts, an American sculptress whose enthusiasm for abstract art led her to visit his Paris studio in the early 1930s. ‘He’s laughing, they’re flirting… She’s obviously very susceptible to his charm,’ she says. His cheekiness is even more apparent from the caption: it was Gwendolyn’s husband, Eugene, who was behind the lens.

Elsewhere in the exhibition we see Mondrian in fancy dress, goofing around in his underwear, or holidaying with friends. ‘I think he is often presented as this rigid artist because people think that his art is rigid, but of course his art is so dynamic, it’s all about movement and that’s reflected beautifully in the more spontaneous photos where he takes different postures,’ adds Verbeek. 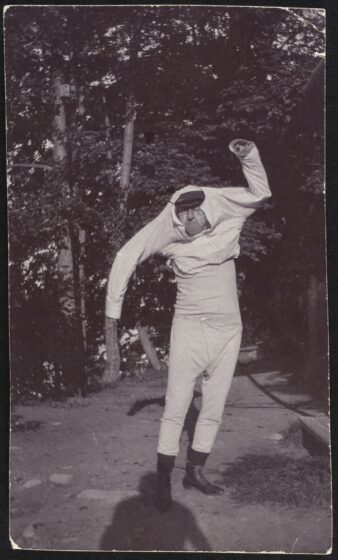 The exhibition is divided into three periods: The Netherlands, where Mondrian began as a landscape painter; Paris, where he transitioned from cubism to total abstraction; and then onto his brief spell in London and finally New York, where he died in 1944, leaving unfinished on the easel the jazz-inspired Victory Boogie-Woogie which would became one of his best-loved works.

Visitors to the exhibition get to see ‘the complete Mondrian’, says Wietse Coppes, guest curator of Strike a Pose and co-author of the book Mondrian and Photography, released on 13 January in Dutch, French and English, and featuring all known photographs of Mondrian and his studio.

‘What makes this exhibition special is that we have the official portraits that Mondrian commissioned during his lifetime and we combined them with snapshots from his private life,’ Coppes told DutchNews.nl.

In addition to the more familiar shots of Mondrian’s studios, we get glimpses of Mondrian’s social life. We see him lounging with friends by the River Gein in his 30s, smiling in his 50s as he pours wine for fellow artists visiting his studio, and aged 70 rubbing shoulders with the art world’s A-list (Duchamp, Breton, Ernst…) at the home of art collector and socialite Peggy Guggenheim.

The photographs also provide rare insights into his work methods, with close-ups of Mondrian’s paint palette and a series showing him working with a long-handled brush over a horizontal canvas. A photo of Mondrian in a painter’s smock putting on a gramophone record suggests he worked to music. 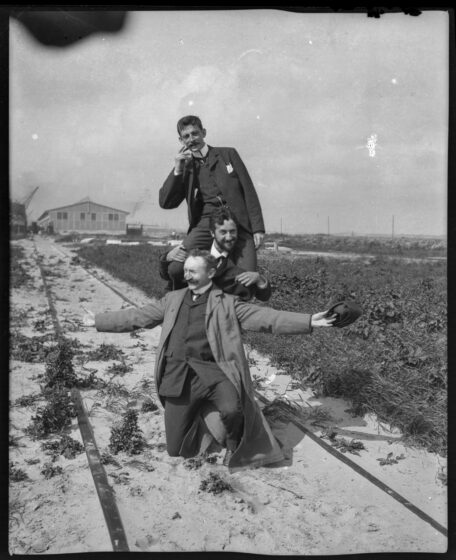 Piet Mondrian with Frits Bodenheim on his shoulders and Simon Maris kneeling on the quay in IJmuiden, 28 August 1903, RKD collection

Mondrian himself made little use of photography creatively, with perhaps one exception: a bearded headshot from 1908, which features early on in the exhibition. Crease marks at the edges indicate where the composition was altered for a self-portrait Mondrian later produced from it in charcoal and chalk.

Photography, for Mondrian, was primarily a promotional tool. He commissioned the best photographers of his era to take profile pictures of him, adopting formal poses in smart tailored suits in the hope that he and his unconventional art be taken seriously.

Strike a Pose was created in collaboration with the RKD (Netherlands Institute for Art History) and the Huygens Institute for the History of the Netherlands. Together, they uncovered almost twice as many images of Mondrian and of his studio than the team had anticipated, over 400 of which are published in the book.

This comprehensive archiving of Mondrian’s photos began in 2020 and was an extension of the work already begun by the RKD’s Mondrian Edition Project, which has been collecting all Mondrian’s letters and writings since 2015.

Strike a Pose | Mondrian and Photography is at the Fotomuseum Den Haag until 21 May 2023.