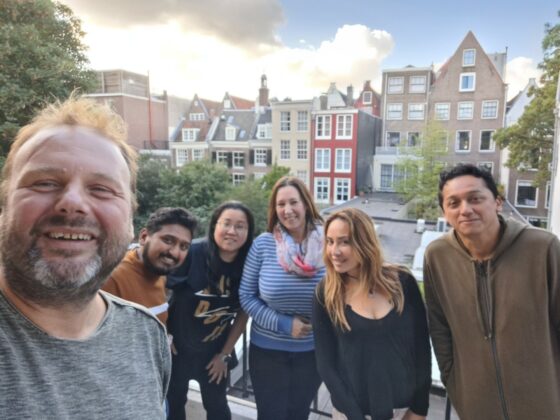 Talencoach founder Albert Both (left) with students from his Dutch Brainwash course.

‘It was probably the worst thing I could do,’ says Olga Maksymova (36), who moved from Ukraine to the Netherlands in 2010 to take up a job at an IT agency. ‘Work wanted me to speak Dutch, but no one was helping me, so I was using Google Translate.’ The conversations were stilted, there were huge pauses, and her colleagues seemed irritated. ‘They told me: please use English.’

Olga’s morale was shattered and for a long time she gave up hope of learning Dutch. ‘To me it was just a noise. I was not trying to do anything about that because I was afraid to give a bad feeling to people,’ she says.

In time, Olga realised she had to stop making excuses. ‘I recognised that, since I’m in the Netherlands, I should actually speak Dutch,’ she says. With the help of courses, Olga eventually passed her integration exams, but the original problem persisted. ‘They didn’t bring me to the point that I could actually speak,’ she says.

Talencoach’s intensive seven-day Dutch Brainwash course, founded in 2003 by polyglot Albert Both, offered a radically different approach. ‘I had tried already everything and nothing was working,’ Olga remembers. She decided to give it a go.

The fun, conversation-centred approach made all the difference. ‘It’s amazing,’ she says. ‘Albert started to explain it from small things, step by step, rules, how it works… so I started to gain confidence.’ In Albert’s classroom on Amsterdam’s Keizersgracht, there were no exams to pass, just a light-hearted, highly personalised exploration of the Dutch language within a relaxed group of up to eight students. ‘After one day, we were like really good friends,’ remembers Olga. 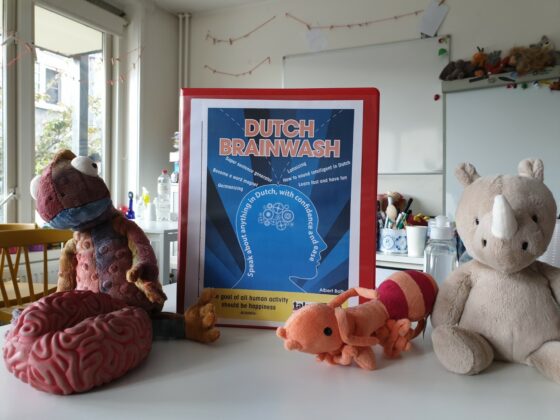 Arun Balasubramaniam (38), an ICT professional from India who has lived in the Netherlands for almost 15 years, also put off learning Dutch. ‘It wasn’t anything pressing,’ he explains. ‘I was never sure that I would stay here … [and] I started work in an international environment so it was never required.’

Later, with his children in Dutch schools and a new role in a Dutch company, Arun’s need for Dutch grew. Like Olga, he found that conventional courses did not help him communicate well enough in his daily life. ‘It takes a lot of effort to learn the language traditionally, like the grammar and the vocabulary, and that doesn’t give us enough confidence when we are trying to get into a lot of practical usage of the language,’ he says.

Enrolling at Talencoach changed that. ‘Albert’s approach brings up the confidence, [working] in a logical manner to understand all the bits and pieces and how they connect,’ he says. ‘Then you can work on your own, and that’s what I like.’ Talencoach also helped Arun keep up his Dutch once he had finished the Brainwash course with refresher questions over email for the first 30 days and free conversation sessions for alumni on Sundays.

‘Speaking Dutch is not just about buying some cheese or herring,’ says Albert. ‘It’s really about talking with people, making jokes, talking about feelings – things that really matter to you.’ He adds: ‘When I work with people, I relate with every person personally. It really has to be about you because it’s you doing things in the Dutch universe.’

At Talencoach, learning a language is never about rote learning, but understanding how a language works. ‘You can never memorise your way to confidence,’ Albert stresses. Instead, he advocates a more playful, improvised approach. ‘It’s about laughing a lot and getting rid of inhibitions. The freer you feel and the more easy-going you become, the easier it will be for you to speak another language,’ he says. 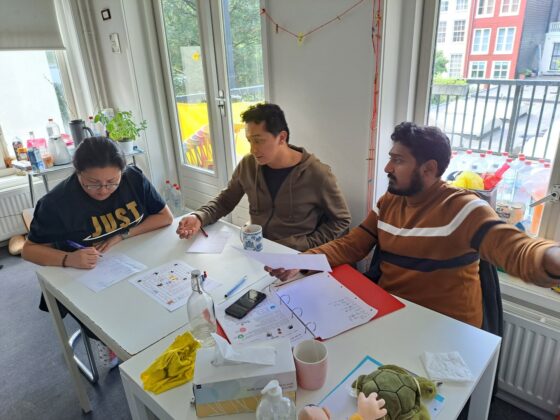 Albert acknowledges that students might feel shy, or, like Olga, might have had discouraging experiences in the past when they’ve tried to speak Dutch. ‘When you speak a language it can stir up many negative things because people will always hear your accent and learning a language can feel like you have to start all over again,’ he says. ‘But it’s also important to be patient and let go of self-criticism.’

‘We love to discover things; we just got too serious,’ Albert continues. ‘With my Brainwash, people discover that they are already very resourceful. In our lives, when we do something we think that it has to be perfect immediately, we have to find the right answer immediately – and it’s not about that. It’s really about being relaxed, playing with something new, discovering certain patterns, experimenting and knowing that you can learn at all times and that you can really enjoy it – it’s a creative process.’

Albert’s refreshingly different approach has helped hundreds of students like Olga and Arun use Dutch with confidence in their everyday lives. According to Albert, anyone can speak Dutch. ‘Maybe you tried a course and it didn’t work and you draw the conclusion that you are not gifted for languages. It’s not true. It’s about finding your way and then you can do it.’

You can find out more about Talencoach’s Dutch Brainwash course on their website.