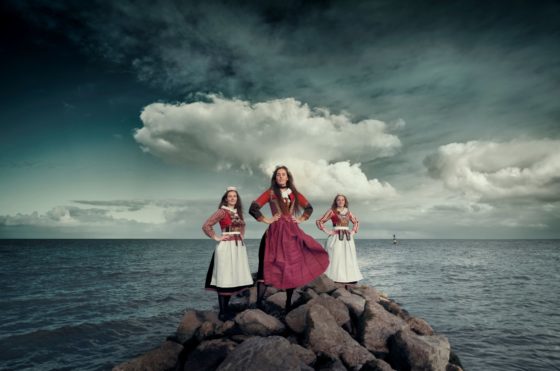 The latest work by Amsterdam-based photographer Jimmy Nelson shines a light on the Netherlands’ distinct regional identities and the beauty of their traditional dress.

‘It’s a love story and a gift to the nation that’s saved me,’ says British photographer Jimmy Nelson of his latest photographic series Between the sea & the sky, which tells the stories of 20 Dutch regions through their legends, their landscapes, and their traditional dress, still worn for special events and by some isolated communities.

In September, 750 people in traditional costume gathered on Amsterdam’s Museumplein to launch the hefty 4.5kg, 528-page book of the project. The bilingual (Dutch-English) book features hand-drawn maps and almost 400 images, from Volendammers sailing the Markermeer in traditional tan-sailed Botters to Frisians skating on frozen lakes.

The book is accompanied by an app adding audio-visual material to each chapter, including behind-the-scenes footage. Visitors can also see images and footage from Between the sea & the sky and Jimmy’s previous projects at Fabrique des Lumières, an immersive light and sound experience currently showing in Amsterdam but with plans to tour the country. 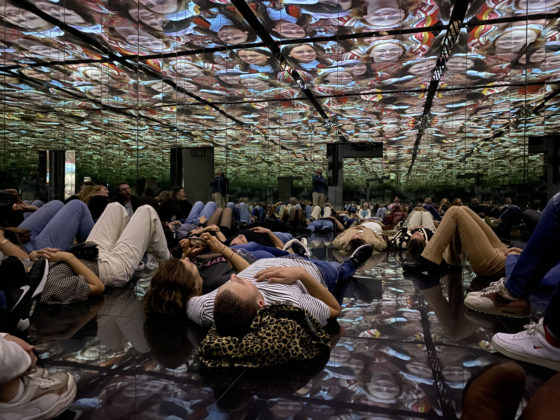 An image from Between the sea & the sky is projected on the walls, ceiling and floor of a room at the Fabrique des Lumières. Photo: DutchNews.nl

Nelson has lived in the Netherlands for 33 years, following a traumatic childhood in the UK and a period of soul searching abroad. He has long seen the country as an adoptive homeland and place of refuge. Though he is best known for his photographs of indigenous communities in some of the planet’s most remote corners, the pandemic led him to look closer to home, where he discovered rich subject matter, often just a short trip from his studio in Amsterdam.

‘For such a tiny country of 17m people, in which you can drive from one end to the other in four hours, [I was surprised] how outrageously diverse it is, and how extremely authentic it is and original,’ Nelson told DutchNews.nl. ‘Every single one of these chapters in the book is unique. There is nowhere else in the world that looks or dresses or has these traditions.’ 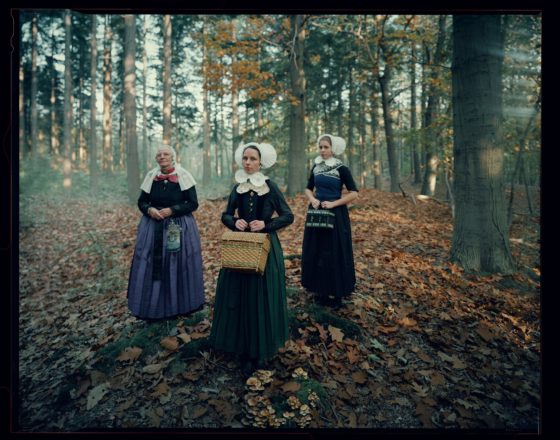 The project began with a hard-won invitation to photograph residents of Marken, a peninsular village that was still reeling from a local tragedy. Neighbouring Volendam came to hear of it and wanted to take part, inviting Nelson to observe a sailing event undertaken in traditional dress. ‘It kind of snowballed,’ Nelson remembers. Even religious Staphorst, ‘a very, very closed society’, welcomed Nelson after the younger members of the community, who knew Nelson from his media appearances, persuaded the elders that he was trustworthy.

The sea and the sky surrounding these populations was crucial to the compositions and Nelson deliberately sought out the extremes of the Dutch weather. ‘I always choose the worst season to visit a location,’ he says. ‘It’s in the seasons that are most climatically unpredictable that you get the most dramatic and exciting light.’ Dutch light, Nelson says, is ‘magnificent’. Even with indoor portraits, he made a point of shooting using only window light with reflectors, creating that celebrated effect mastered by Dutch painters such as Vermeer. 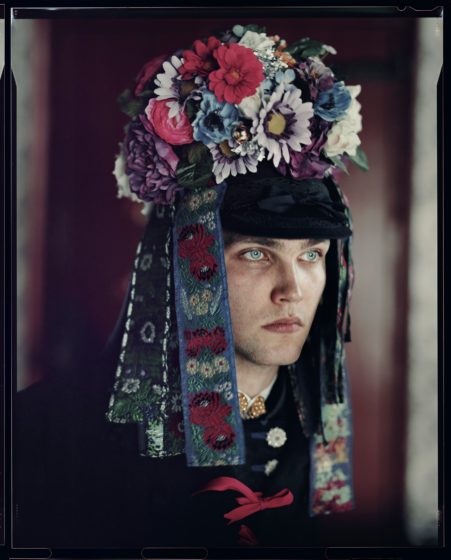 The images were shot using a handmade analogue camera working in a 8×10-inch format, in a deliberate attempt to slow down the experience and build a relationship with the subjects. ‘When you use indirect, ambient light, the light becomes a lot slower,’ Nelson explains. ‘What contemporary photographers do with their iPhones and their digital SLRs, everything’s so much quicker, there’s a much higher ISO and they use flash so there isn’t that intimacy, that investment in the time and the stillness.’

Between the sea and the sky pays homage to the natural beauty of the Netherlands. Readers journey through the sandy dunes of Katwijk, the flowering heaths of Huizen, and the cattle-specked polders of the agricultural east. Through stories, we are introduced to each region’s distinctive heritage. We learn how the Frisian sport of fierljeppen (pole-vaulting) began as a way of getting across the region’s broad ditches and canals, for example, and the role black liquorice once played in the courting rituals of church-going youngsters in Spakenburg (Utrecht Province). 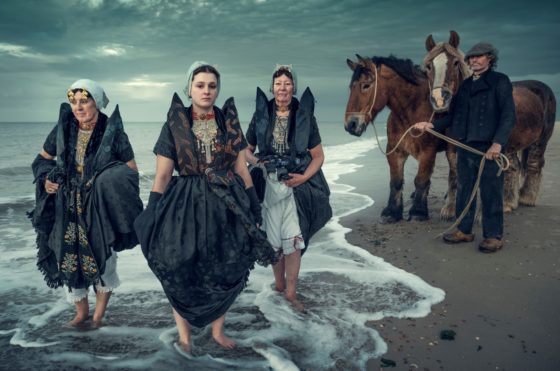 But above all, the book is an ode to the Dutch people and how welcome they have made Nelson feel, both in his time living here and in the completion of this latest project. ‘It’s a country that doesn’t have curtains,’ he says. ‘This country saved me with its openness.’

The Last Sentinels: Heroes from near and far is showing at the Fabrique des Lumières until 13 November.