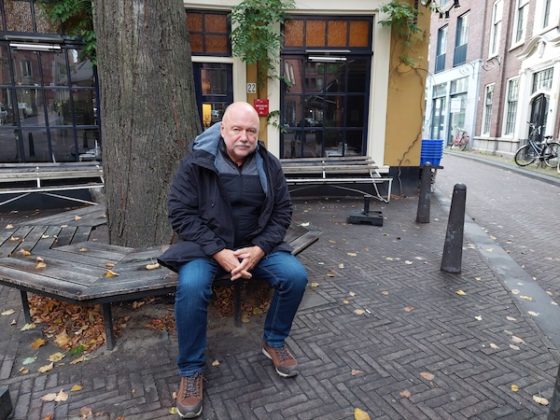 On the eve of Russia’s invasion of Ukraine, the novelist Andriy Kurkov was cooking borscht in Kyiv for a group of friends.

They included two western journalists who were in town to write about the escalating situation in Ukraine. But even then, after 150,000 Russian troops massed on the Ukrainian border and Vladimir Putin had signed decrees recognising the Russian-controlled republics in Donbas as independent statelets, most Ukrainians were blasé about the prospect of a full-scale invasion.

‘We were joking that this might be the last borscht in Kyiv,’ Kurkov says. ‘But when the evening was over, around midnight, everybody in my flat started exchanging mobile phone numbers. Just in case. There was a feeling something was about to happen.’

What was about to happen became clear within hours. Kurkov stood by the window of his flat in Kyiv’s historic quarter, rooted to the spot, as missiles rained down on the city. In hindsight, the war was inevitable, he says, in part because of two historic mistakes. The first was Putin’s vanity: ‘He’s getting old and frail, and he wants to be remembered in the school books as somebody who made Russia great again.’

The other was the belief in Ukraine and further afield that Putin would not take the conflict beyond the Donbas region, which has been at war since 2014. ‘60% of Ukrainians didn’t believe the war was possible because this type of war is unthinkable in the 21st century. They thought it was impossible to have this kind of war now, because everyone is civilised. Which meant they believed Russia was civilised. And this was a mistake.’

Kurkov, 61, was in The Hague last week to promote the Dutch translation of his latest novel, Grey Bees (Grijze bijen), and his recently published war diaries, Diary of an Invasion, at the Crossing Border festival. The latter describes how ordinary Ukrainians try to carry on with their daily lives in a war zone. He describes chronicling the war as more a duty than a pleasure and his way of contributing to the ‘war against the Russian attempt to colonise Ukraine again.’

Grey Bees was first published in Russian in 2018 – Kurkov is a native Russian speaker – and tells the story of two men who are the last remaining inhabitants of a village on the edge of the Donbas. One of them, Sergey Sergeyich, is a beekeeper who has to transport his charges to safety, out of the combat zone, a journey which brings him into contact with soldiers and civilians on both sides. The other, Pashka, is an old schoolmate and former rival, but fate has given the two men on opposite sides of the conflict a common cause: if they leave, their village will be destroyed.

The ‘grey’ in the title refers not just to the grey zone between the battle lines, but ‘the grey area in the minds of people in Ukraine who were never interested in politics’, Kurkov said. Sergeyich is an apathetic, somewhat naïve figure, but seen as a wise man because of his knowledge of bees. ‘When a person like this is confronted with the war, the first thing he does is defend what he loves. So everyone who is attacking his bees is an enemy. And then life forces him to analyse and take decisions, and take sides.’

Kurkov was born in Leningrad, now St Petersburg, in 1961, but moved to Kyiv at the age of two when his father got a job there as a test pilot. All his 24 novels have been written in Russian, though he has switched to Ukrainian for his non-fiction works and sometimes writes in English, his wife Elizabeth’s native tongue.

He sold his first novels on the streets of Kyiv, having published them himself using six tonnes of packaging paper he imported from Kazakhstan. He cut deals with owners of newspaper kiosks, made himself a sandwich board and stood between hawkers of Russian dolls until all the books were gone.

His entrepreneurial approach was rewarded with a traditional publishing deal and a Ukrainian translation of his satirical novel, Death and the Penguin, set in the mafia-dominated Kyiv of the 1990s. It became a worldwide hit, celebrated for its black humour, minimalist prose style and its quirky protagonists, the lonely writer Viktor and his rescued pet penguin, Misha.

Kurkov admits that being a writer of Russian heritage was a ‘painful’ experience when the war broke out, even though he has been persona non grata in Russia since 2005 because of his support for the Orange Revolution.

‘There are many active Ukrainian-speaking intellectuals who are completely against the Russian language and say everything Russian should be banned,’ he says. ‘There are people who don’t accept me as a Ukrainian writer. There are newspapers who won’t publish reviews of my books. But that’s our normality, that’s the reality I have to face.’

‘You have to understand the emotions of Ukrainians who say that Russian is the language of the enemy. I cannot be angry with my friend who lost his son in the war if he starts to write against the Russian language.’

Kurkov argues that banning Russian is fruitless: ‘You cannot ban language: you cannot punish people for the language they speak’. But he accepts that Russia is finished as a cultural influence in Ukraine. ‘Russian rap was very popular among young Ukrainians, including Ukrainian speakers. On YouTube the top 10 videos watched in Ukraine mostly came from Russia. But that’s over: the top 10 videos now are all Ukrainian.

‘But I hope people understand that Russian speakers in Ukraine are not part of Russia, either politically or culturally. They’re different from Ukrainian Hungarians, for example, who are connected to Hungarian language and history but still Ukrainian citizens.’

Writers at the front

Kurkov is also the president of Ukrainian PEN, the international charity that supports persecuted and endangered writers, which has taken up a significant part of his time since February.

Half of Ukraine’s writers, including himself, were internally displaced when the Russians invaded, though he has since returned to Kyiv. Up to 30 writers and translators have been killed during the fighting or kidnapped by the occupiers, including the children’s writer, Volodymyr Vakulenko, who has not been heard of since he and his son, Vitalii, were taken from their home in Kharkhiv region on March 7. ‘He was a social activist as well as a writer, and very pro-Ukrainian,’ says Kurkov.

The significance of being in The Hague does not escape Kurkov, who ‘very much’ wants to see Vladimir Putin brought before an international tribunal, along with the propagandists who call for his country’s destruction on nightly talk shows. ‘Journalists in Russia instigated this hatred,’ says Kurkov.

‘They were talking about bombing Kyiv 15 years ago. Even people in Ukraine thought they were just stupid jokes, but in fact they were preparing their population to accept that their country can invade another country, destroy its cities and kill its civilians.’

Even after more than 20 novels, Kurkov is not worried about running out of material in Ukraine. ‘It’s always evolving, it’s always dynamic. Since 1991 I feel as if I have lived through five different Ukraines, from a criminal state to a civilised eastern European country, and now a country at war,’ he says.

After the war will come a sixth phase, when Ukraine will have to build a new society that accommodates the millions of war veterans, returning refugees and internally displaced people. ‘It will not just be rebuilt physically, but changed politically,’ he says.