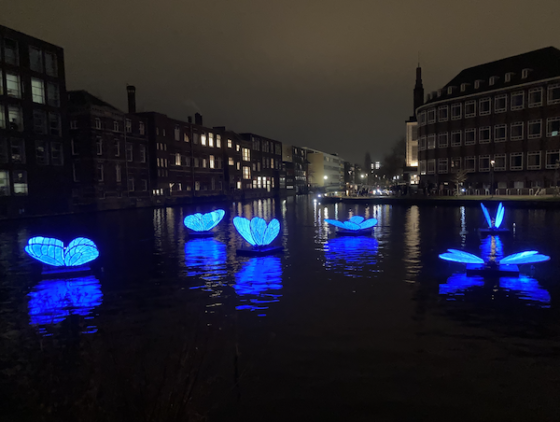 As the dark nights draw in, Amsterdam lights up and this winter is no exception. Bridges are covered in lights, Christmas decorations are everywhere and the Amsterdam Light Festival takes place.


This year’s light festival, dubbed Imagine Beyond aims to ‘unleash the power of our imagination’, though 20 different art works dotted around the Plantage neighbourhood of Amsterdam.

The festival, now in its 11th edition, has become a fixture on the Dutch capital’s calendar and draws thousands of people every year.

Starting on December 1, you can walk the 6.5 kilometre route free of charge, pay to download an interactive map on your mobile phone, cycle or have a private guide, but perhaps the best way to appreciate the show is from the water.

‘The festival gives a magical atmosphere to the Amsterdam canals,’ says Timo Haaker, founder of electric boat company Starboard Boats, which has been running festival cruises for the past five years.

‘The canals of Amsterdam are unique and beautiful even without the art and in the winter they are especially pretty. And when you are on the water, you really are in the middle of it all.’ 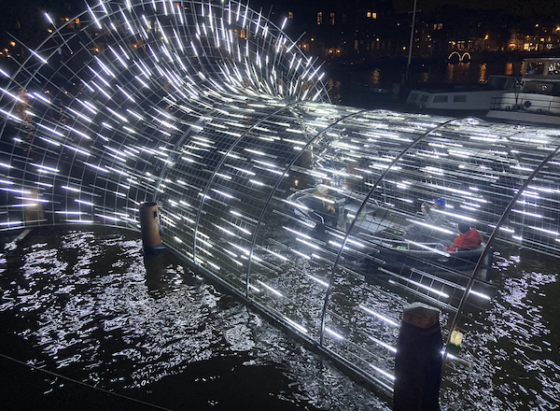 Starboard Boats offers two options – a private cruise for you and a group of friends or workmates – or a cruise on a bigger boat together with others.

‘We get a very diverse group of people on our cruises and we have more locals than tourists,’ says Haaker. ‘And we get lots of families with children as well. We don’t overcrowd the boats so you never feel that you are being squashed in or can’t get a good view.’

For the Amsterdam Light Festival, the most popular cruise is in a semi-open boat with plenty of blankets and mulled wine or hot chocolate. ‘It might sound chilly but you won’t get cold,’ says Timo. ‘And if you decide to go on a cruise for a date, what better excuse to get cosy?’

Starboard Boats has also recently acquired its first salon boat, which offers a very elegant way of visiting the Dutch capital by canal. Built in 1933, the Energie, can take up to 10 people plus captain and host, if you are looking for a more intimate outing. 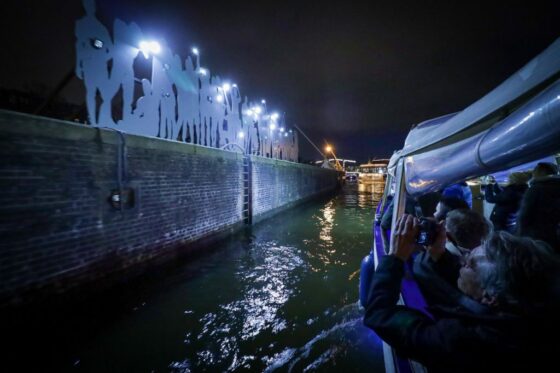 Taking pictures from onboard the Starboard boat. Photo: Starboard Boats

The host or hostess on board is an English speaker who knows all about the art on show, while the captains are Dutch, so both languages are covered. ‘We don’t provide a tape recorded commentary and there are plenty of opportunities to ask questions,’ Timo says.

This year, students from the Breitner Academie have produced their own light work for the show and around 1,000 Amsterdam primary school children have been working together with Studio Toer to create their own Bridges of 1,000 Dreams.

‘There really is something very special about moving silently through the water at night, surrounded by lights,’ says Timo. ‘The light festival really is part of the Christmas season.’

The festival’s art works are lit up from 5pm to 11pm every day, apart from New Year’s Eve. Book your cruise here