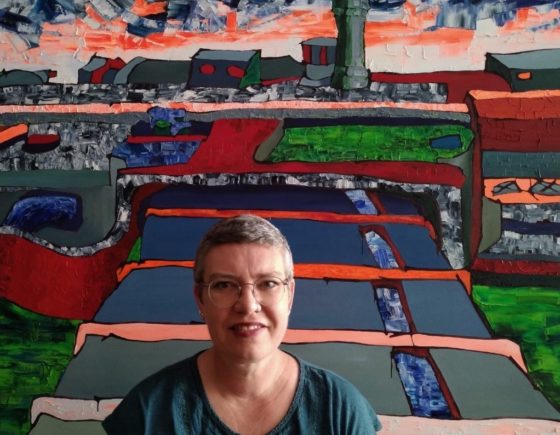 Californian-born artist and painter-decorator Sharma Peterson (52) has lived in the Netherlands more than half her life and has dual nationality. She loves the Netherlands for its gun control laws and goofy comedy, and likes getting lost among the wonderful people and streets of Amsterdam.

I met a guy in a bar in California and it turned out he was Dutch and he was going to be in California for a few months working on his PhD in computer science. We fell in love and he said: ‘If you save up enough money to get a return ticket from the Netherlands, I will pay for your ticket over.’ And I said: ‘Hell, yeah!’ So I did that. I came over with a backpack, a box of books and my dog.

How do you describe yourself and why?

I would say I’m an immigrant. I didn’t have to give up my American passport, so I could go back to the United States, but I don’t particularly want to because of all the political and social stuff that goes on there. I never really felt like I fit well in the United States. I feel much happier here.

I’ve lived here for 27 years, which is over half my life. I have a company and my friends are almost all in this country. I can imagine moving to another country in Europe, but my feeling is that I would like to live the rest of my life here. And that’s because the standard of life here is incredible, I know amazing people, and my whole life has been built up here.

I just really love how incredibly multicultural Amsterdam is. I think it’s fantastic. You can meet people from all over the world. I’m no longer with the man I came over here to be with, but it’s kind of gone full circle as I’m now married to someone who is also from California but who I met here in Amsterdam.

I do speak Dutch quite fluently. I knew I wanted to stay here when I got here, so I immediately started trying to learn Dutch. Because I was with a Dutch guy, I had the immersion part. But also, he suggested I turn on the radio and listen to Dutch news all the time, which I did. I also watched a lot of Dutch television. I watched Van Kooten & De Bie, two Dutch comedians who make up lots of words and do lots of political skits and are amazing.

In the 1990s, I went to a Dutch language school which was subsidised by the government. It was 50 guilders for a semester of classes. I took two semesters and later I took a grammar and spelling course and all the inburgering tests through the Vrije Universiteit. The other thing I did was I bought a big Van Dale Dutch-English dictionary. It’s two volumes and really heavy. I would sit and read them and I started drawing the words and I made an illustrated ABC book in Dutch.

Gun control. I just feel so much safer here with gun control. I’m not afraid the way I was in the United States. It just makes for a much more relaxed way to go about your life. It’s way less stressful living here.

My husband’s American, so in our household we’re doing our American thing − cooking up black beans, swearing a lot and using American slang. And in the outside world, I am just part of Dutch culture, speaking Dutch and being around Dutch people.

I’m sort of in between, and I find it a weird question because, especially in Amsterdam, there are so many different kinds of people that it’s very difficult to say exactly what ‘Dutch’ is, except in a sort of generalised way. I think there’s a lot of freedom here to be yourself, and I feel I can be myself and I am very much myself here. So maybe that is, in some way, being Dutch or being Amsterdams.

I would like to meet Rembrandt and take painting lessons from him. There is so much speculation about how he made his paints and was able to achieve so many spectacular effects in his paintings and I would love to learn how he did it.

Number two is Piet Mondrian. Because I am painting more abstractly for the past four years, I’d like to talk with him about how he developed his system of abstraction and what he felt were the impulses behind the symbolism of his colours. I’d like to understand a bit more deeply what he was doing.

Number three is Miep Gies. She’s the woman who took care of Anne Frank’s family. I just think she’s an amazing hero, and the bravery she had is super inspiring for me. I’m a military wife and I’m always scared when my husband is deployed. Thinking about Miep gives me courage.

When you get to Amsterdam, and you’re at Central Station, do not walk down the Damrak! Walk down the smaller side streets and get as lost as you possibly can – and don’t take street drugs! And just meet all sorts of amazing people, because that’s what Amsterdam is all about.

I’m a pacifist raised by transcendental mediators in Berkeley, California, but I’m married to a soldier. Because of this, I paint guns in a way where I try to break them down and transform them and strip them of their power. I paint the guns to look like landscapes. When Dutch people look at these paintings, they tend to see the landscape and not see the guns. Whereas, in my experience, a lot of Americans tend to see the guns and they don’t see the landscape. I think, having gun control, Dutch people don’t need to be concerned with watching out for guns all the time and they don’t think about them all that much. I find that culturally super interesting and surprising as well.

I would call up all my friends and throw a massive party to be able to say goodbye, and I would try to find good homes for as many of my paintings as possible in the hope that some of them might outlive me.

You can find more about Sharma’s gunscapes here.

Sharma was talking to Deborah Nicholls-Lee