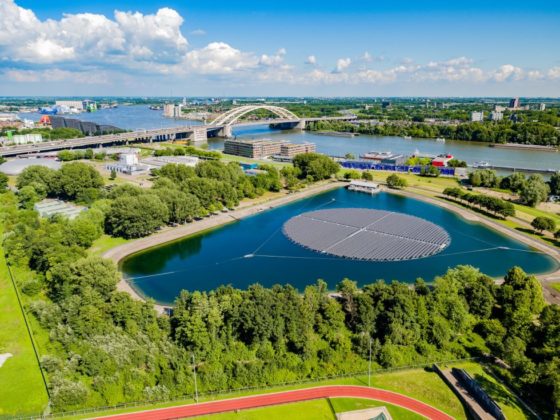 Rotterdam might not be known for its sunny skies, but for the next seven weeks it will host the world’s first Solar Biennale, celebrating the potential of solar power to provide clean energy, and positioning Rotterdam at the forefront of emerging technologies.

The Solar Biennale is centred around the Design and Architecture museum Het Nieuwe Instituut in Rotterdam’s Museumpark and runs from 9 September to 30 October.

The event is expected to attract 40,000 visitors, from members of the public exploring a solar-powered world at The Energy Show exhibition, to industry insiders and innovators drawn to the seminars and four-day labs.

Installations, such as Studio Roosegaarde’s Urban Sun, which uses far-UVC light to reduce the presence of viruses in public areas, will also be on display in the city.

‘The aim of the Biennale is to change the narrative on solar energy, which is now focused on technology and efficiency, into something that is for everyone, more inclusive, and part of our culture,’ Van Aubel told DutchNews.nl.

Solar power, she argues, could generate 100% of our energy and deserves a bigger stage. ‘It’s a source of energy that we have in abundance. Every hour, we receive enough energy for the world to live off for an entire year. We’re completely not using this energy.’

‘The growth of solar is going much faster than scientists anticipated,’ Van Aubel adds. ‘The projections are that it will become the world’s cheapest source of energy in a short time.’

Van Aubel hopes that the Biennale will help people reimagine solar energy’s possibilities, particularly in the field of design. ‘It doesn’t need to be this rectangular square on your roof … You can apply it everywhere and have it on the place where it’s directly needed,’ she explains. ‘In the future, I think we will consider an object broken if it doesn’t generate its own energy.’

In recent years, Rotterdam has become an unexpected leader in light-based innovation. Last year, Europe’s largest floating solar park, Project Evides, was created in the east of the city, while in 2019, in the southern suburb of Reyeroord, Living Light realised the world’s first park illuminated by plant-powered electricity.

But Rotterdam’s energy ambitions extend beyond solar. In May it hosted the World Hydrogen Summit, and the new Hydrogen Hub, centred around the port and due for completion in 2030, aims to supply 4.6mt of hydrogen to Europe annually.

‘The port of Rotterdam is the most innovative port in the world and wants to be the most sustainable, so we want to be the frontrunner of energy transition,’ Wilbert Lek, managing director of Rotterdam Partners, the city’s marketing organisation, told DutchNews.nl.

‘The Solar Biennale is important to make sure we are not only focusing on what industry needs, because that’s the reason hydrogen is so important, but looking at people.’

‘If you want a liveable city, region or country, you need to bring this new technology as close to people as you can,’ Lek added. ‘Hopefully, we can push these innovations further and make sure that they are implemented.’