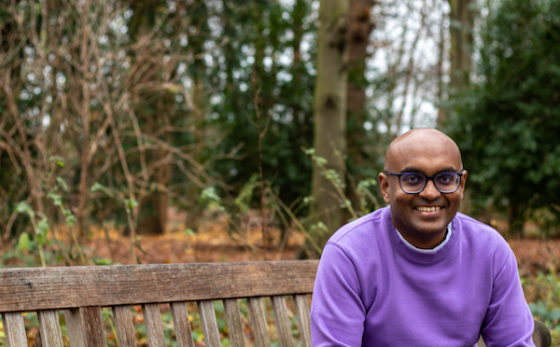 Yuven Muniandy fulfilled a childhood dream when he moved to the Netherlands to work on his PhD. Originally from Malaysia, he’s since fallen in love with the country and its bike culture.


How did you end up in the Netherlands?
I came to the Netherlands to do a PhD program. Back in Malaysia I was working at a stem cell manufacturing company. I had a secure job but I felt there was something lacking. Basically, I didn’t know what to do with my life. A good friend of mine who finished his PhD in Germany knew I was interested in scientific research. He suggested I do a PhD in Europe. I landed at Schiphol airport in the dead of winter, eight years ago now.

Looking back, it’s a miracle I finished the PhD. I was struggling with some personal problems at the time, and also had a loss in the family to cope with. It all seemed pretty hopeless. Fortunately a kind and empathic supervisor helped me complete the PhD program.

I now work have a job with a life science company at the Leiden Bioscience Park. During the last year of my PhD, I realised my calling is to be a writer or journalist. I believe the life journey that I experienced over the last eight years is part of a bigger learning curve.

How do you describe yourself – an expat, lovepat, immigrant, international?
I consider myself a nomad-pat. Even back in Malaysia, I was always on the move. Both my bachelor and master degrees were from two different universities, 900 miles apart across the South China Sea. I love the Netherlands, and this is where it feels like home. But you never know where life may take you. It can happen in the blink of an eye. For now the Netherlands offers various opportunities for me to pursue my passion, calling, and purpose in life.

How long do you plan to stay?
I am fully settled here in the Netherlands. I wouldn’t mind relocating to other parts of the Netherlands, especially the east part of the country. I’m at the stage where my career is starting to take off and moving to another country is not really an option at the moment.  I have been living here for almost eight years now and pretty well up to the norms and living conditions here.

Actually, my love for the Netherlands goes back to my childhood. In Malaysia, there is a famous dairy product manufacturer called Dutch Lady. In the late 1980s, there was an advertisement for Dutch Lady products where a milkmaid carried buckets of milk in the middle of a green pasture full of Holstein Friesian cattle. That was when I first fell in love with the Netherlands and decided to live there.


Do you speak Dutch and how did you learn?
Ik spreek redelijk Nederlands [I speak Dutch reasonably well]. I learned Dutch through different ways, mostly by using different study books and online materials.

I want to spend more time on grammar and get complete fluency in the language. There is room for improvement in my Dutch fluency, but I believe perseverance and practice will result in perfection in the end.


What’s your favourite Dutch thing?
Bicycles. I just love cycling in the Netherlands. Here’s a secret: I learned how to ride a bike in the Netherlands! I believe a lot of foreigners are introduced to cycling here. I enjoy bike riding in all weather. Each season offers different types of beautiful and unique landscapes. It’s very therapeutic.


How Dutch have you become?
Ik ben bijna Nederlander [I am almost Dutch], perhaps 50-50. I use a bicycle to go everywhere in Leiden. I feel restricted it when my bike is broken and I am forced to walk. When I forst came, it was a bit of a struggle and strange for me to eat a boterham [sandwich] for lunch. I am from a culture where we have a hot meal for both lunch and dinner. But now I am used to it and, from time to time, I do have a nice hot meal for lunch.

Which three Dutch people (dead or alive) would you most like to meet?
Corrie ten Boom. She was the daughter of a watchmaker named Casper ten Boom. Together with her father and sister, Betsie ten Boom, Corrie helped many Jewish people escape during the Holocaust in World War II. The house of the Ten Booms became a hiding place for many fugitives.

Anne Frank. Well, she is not really Dutch, but she is considered Dutch since she lived the majority of her life in Amsterdam. Her voice still speaks for all those who were silenced during this dark period of history.

What’s your top tourist tip?
I guess one size doesn’t fit all. It really depends on what  sort of a place you enjoy. I have been to tourist places both in the Netherlands and across Europe where the majority of the masses go. Personally, I do not enjoy overly crowded places, and they are claustrophobic.

If you are like me and you like peace and quiet and natural landscapes, the Veluwe region is certainly worth visiting. I was lucky enough to go there and I immediately fell in love with its purple heathlands.

Another place that caught my attention many years ago was Zaanse Schans. It’s home to 17th and 18th century windmills used to grind spices, mill flour, and produce wood. There are also plenty of little museums there, such as the Albert Heijn Museum.

Tell us something surprising you’ve found out about the Netherlands
Food. I never expected to find Asian cuisine in the Netherlands. All I was expecting was burgers, French fries, and bread. Don’t get me wrong, I do enjoy western food, but I was totally flabbergasted to see an Indonesian restaurant called Selera Anda [Your Taste] in the middle of Leiden.

It didn’t stop here. As I explored different Dutch cities in the Randstad, I came across Middle Eastern, Indian, Chinese, Iranian, and East African cuisine. The Netherlands has been a safe haven for people from all over the world, and this is the main reason why there are different types of food from all over the globe.

If you had just 24 hours left in the Netherlands, what would you do?
This is something really hard for me to contemplate, settled as I am here. But if I had no choice and had to leave the Netherlands in 24 hours, I would go to the Veluwe and have one more bike ride in the woods and heathlands. I also would want to see all my close friends.