For one month only, visitors with a head for heights can buy tickets for the Rotterdam Rooftop Walk − an experience which offers a new perspective on some of the problems the Netherlands’ cities face.

In 2017, tightrope walkers inaugurating the third edition of the Rotterdam Rooftop Days festival, made a daredevil crossing on a 130m-long slackline between the roofs of two Lijnbaan apartment blocks, sparking the idea that one day bridges at roof level might allow the public, intrepid or not, to stroll through the city at altitude.

That vision has finally become a reality now that a 600 metre neon orange Rooftop Walk has opened to the public, zig-zagging through Rotterdam’s commercial district, and featuring an unnerving 60 metre-long air bridge spanning the Coolsingel, one of the city’s busiest roads. An estimated 8000 people a day will make the new crossing.

The 30 metre-high Rotterdam Rooftop Walk is open until 24 June and is the highlight of the Rotterdam Rooftop Days (Dakendagen) festival (3-5 June), a three-day celebration of the potential of rooftop space now in its eighth edition. Visitors can choose from 11 different tours, with around 35 rooftops open to the public. 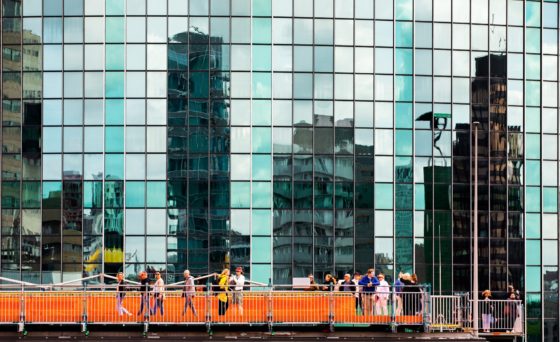 The Rotterdam Rooftalk Walk begins with a tangerine-coloured stairway leading visitors away from the shops of the busy Beursplein and up onto the contrastingly quiet roof of the World Trade Center − a copper showstopper featuring 21,000 round windows. Beyond it is a wall of green glass: the WTC’s elliptical tower, whose mirrored facade reflects the new walkway and the dramatic skyscape beyond.

Then it’s a nail-biting journey across the Coolsingel. The north side yields views of the stately spires of City Hall, one of the few buildings to survive the Second World War; while to the south, the iconic Erasmus Bridge and the cranes of the rapidly redeveloping harbour herald a promising future.

Reaching the roof of the Bijenkorf department store, though 26 metres up, offers a sense of stability. From here, visitors are guided past its monumental honeycomb walls back down to ground level where an electronic voting system invites them to select how society can make best use of its roofs. 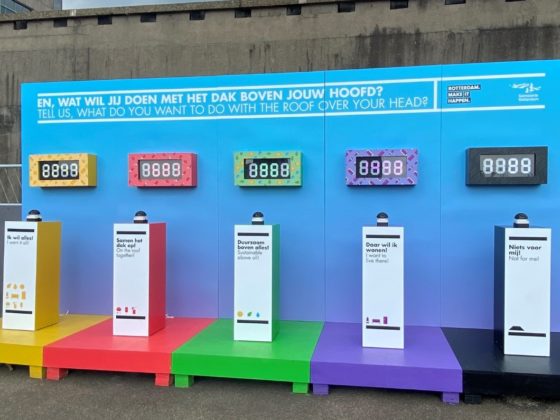 Rooftop walkers are invited to share their views on the best use of flat roof space. Photo: DutchNews.nl

‘We always had the dream of letting people walk from rooftop to rooftop.’ said Léon van Geest, director of the Dakendagen, who introduced the tightrope walkers five years ago to hint at the possibility. ‘If you really want a roofscape, a new layer in the city, you need to connect the rooftops.’

Van Geest admits that erecting two huge columns of scaffolding in downtown Rotterdam was always ambitious. The walk, which was devised in collaboration with MVRDV architects and built by scaffolding company Dutch Steigers, involved ‘lots of practical, delicate choices, interconnected with each other’, he says, such as guaranteeing emergency access, avoiding electricity lines, and protecting monumental facades. 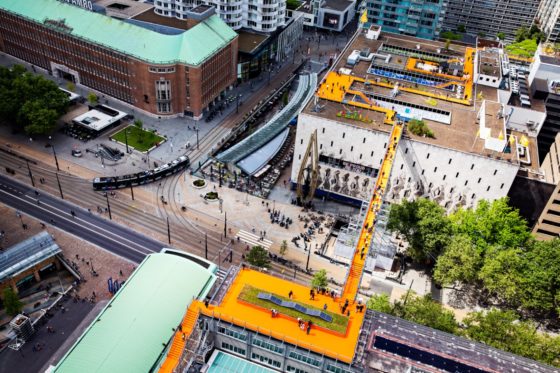 The air bridge, Van Geest says, is ‘a metaphor for what we want to do in the city’. But more important, he says, is the exhibition along the way. From a play surface made of pressure-sensitive solar panels which light up when children jump on them, to drone stations delivering parcels by air, each exhibit proposes a different way of innovating the 18k m² of flat roof available in Rotterdam to address issues such as overcrowding, climate change, and energy production.

Other rooftops opening to the public for the festival include the Depot Boijmans van Beuningen, whose forested crown will host yoga lessons, and the newly completed roof upon the concert hall De Doelen, home to the Rotterdam Philharmonic Orchestra. De Doelen is the first monumental building in Rotterdam to convert its roof, which is now a biodiverse, climate-adaptive space capable of capturing the equivalent of 2000 bath tubs of rainwater.

The Dakendagen coincide with Rotterdam Architecture Month, which runs throughout June and has taken ‘Vista’ as its theme for 2022. Architecture and design museum Het Nieuwe Instituut, the initiators of the programme, have created a temporary rooftop installation of their own: The Podium, an eye-popping pink events space reached via a candy-floss coloured staircase. 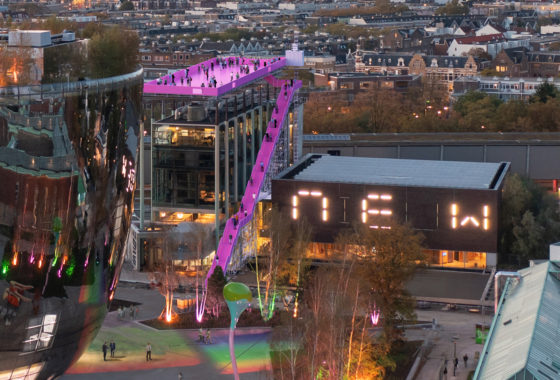 The Podium with the Depot Boijmans van Beuningen in foreground. Photo: MVRDV

The colour ‘gives a kind of feeling of optimism to everybody that sees this’, Gijs Rikken, associate design director at MVRDV told press delegates this week, stating that the roof offered a novel way to see the city and was ‘an expressive new addition to the skyline’.

For last year’s Dakendagen, MVRDV published a rooftop catalogue with 130 suggestions for repurposing rooftop space. This year, the Dakendagen have collaborated with Kino Rotterdam to create a video montage of 30 rooftop scenes that made movie history.