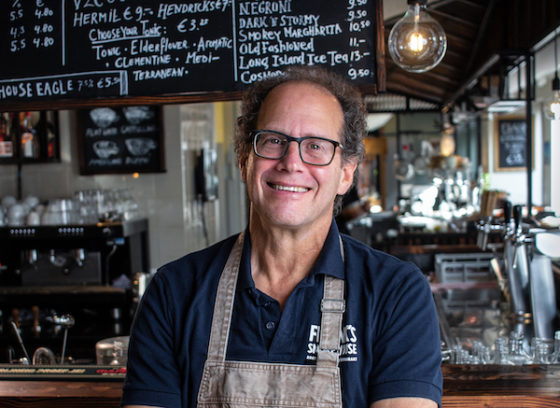 Frank Heyn grew up in Baltimore and became a cook after finding himself in Paris. He later came to the Netherlands to work as a private chef for the American Consulate General before he opened his own business. He’s now the owner and director of Frank’s Smoke House, a popular deli in Amsterdam.

How did you end up in the Netherlands?
Back in 1985, I was living in Paris and working as a cook at the American embassy in Paris. I would also do some occasional moonlighting there as a caterer for some of the diplomats. One of them moved from Paris to Amsterdam to become the consulate general. He had his office on the Museumplein and a beautiful house on the Apollolaan. He was also given a budget for a full-time cook and he asked me if I wanted to come along and be his private chef.

I got to like it here and never left…but, okay, that’s not entirely true. After living here for about three years, I was kind of fed up with it, and I’d had enough. I sold all of my belongings and left. I had plans to go to Portugal and, after that, the next country on my life route. Just before leaving though, I met a Dutch woman and fell in love with her, but I went ahead with my travel plans for Portugal.

I finally got to my destination a few months later. I actually went there by bicycle. A few days later, the Dutch woman showed up, and I just couldn’t leave her anymore. We returned to Amsterdam a few months later and *then* I never left.

How do you describe yourself – an expat, lovepat, immigrant, international?
I came here in the state of mind that I’m an adventurer. I went to Paris without any big plans and wound up finding work, going to school, and staying there for a few years.

When I came to Amsterdam, I thought I’d stay for about a year and move on to the next thing. So I came here as an adventurer and wound up staying here because I felt at home. But, if I had to choose from those four things in the question, I’d pick immigrant because that’s what I feel I’ve become.

How long do you plan to stay?
I’ve been here about 37 years, so I have no plans to leave. It wouldn’t surprise me if I do leave sometime. That would probably be to move to southern France or somewhere else in southern Europe. I also have a few favourite spots in Spain. The reason I would do that is to be closer to nature. Amsterdam is a fine place to be as long as I’m busy with work and other activities and things like that, though.

Do you speak Dutch and how did you learn?
Yes, I do speak Dutch. It took me years to get the hang of it. I was always around Dutch people, so I often found myself in situations where Dutch was spoken all around me. I did my best to figure it out. I picked up French pretty quickly. After six months in Paris, I could speak decent enough French to defend myself and survive.

I figured I could do the same thing when I moved to Holland and that I’d learn the language in six months. That wasn’t the case. It took about five years. I eventually got a job at a middle-sized company here, and I had to write a cookbook. When I was first hired on, they wrote in their weekly newsletter: ‘Our newest employee is Frank. Please don’t speak English with him.’

I’d been here five years at that point. In the course of the following six months as I wrote a book in Dutch and was forced to speak Dutch, it finally started to click. From then on it’s been easier, but it’s still an ongoing learning experience. I’ve definitely gotten the hang of it, but I still don’t know much about Dutch grammar, but I don’t know much about English grammar either. [laughs] But it gets better and better every day, actually.

What’s your favourite Dutch thing?
It’s the language. I find Dutch to be a rich and enlightening language. There’s so much historical context, especially in the proverbs and the expressions that are commonly used.

They reflect so well on the people and their mentality. You can really express yourself clearly with it. There’s a word for everything somehow. But you’ve got to learn how to use it and navigate through it.

One phrase that rings a bell is voor spek en bonen [to participate in an activity without caring about the outcome or not having the ability to make a worthwhile contribution]. It really gives you an idea of how the Dutch think and what the values are in their lives.

How Dutch have you become?
That’s definitely a difficult question. I’ve become Dutch in the sense that I’ve integrated very well into the local customs and culture. At the same time, I don’t feel Dutch, really. I feel at home in the Dutch environment. In certain ways I do act Dutch. I can go on for hours complaining about things and then afterwards say how happy I am to be here.

Which three Dutch people (dead or alive) would you most like to meet?
Michiel de Ruyter. I picked him because I’m just so curious about that era. It was a time that was just so influential in Dutch and world history. It would be very interesting to see what he has to say about how he was influenced and how he was directed to do what he did in terms of going around the world and conquering it in certain ways.

Arnon Grunberg. He’s a contemporary writer. What interests me in him is that he’s moved to the states. He lives in New York now, I’ve heard. I’ve read a few of his books. I think he has a good insight into Dutch culture. I’d be interested to talk to him about his views on life, share some things, and exchange some ideas.

Wim Sonneveld. He was a Dutch cabaretier, actor, and comedian. I found him to be a really top class performer. He had a very good sense of humour and was very authentic. I would just want to enjoy having a few minutes of his time.

What’s your top tourist tip?
I would recommend the Kröller-Müller Museum. It’s great to go there and get on one of those bicycles and cycle through the Veluwe. You can really get a look at the better side of Dutch nature. In the museum itself, there’s lots of great art to experience both inside and out. Indoors there’s paintings and outdoors there’s a beautiful and expansive sculpture garden. There’s a really wide range of both classical and contemporary sculptures that are well integrated into the nature around them.

Tell us something surprising you’ve found out about the Netherlands
In the years that I’ve lived here, it’s surprised me how many innovative and influential things have been developed here in Holland. They’ve impacted the entire world. It’s a small country, but it’s made quite a big footprint in many ways if you think about it. You can think about the stock market and how more and more cities are going the bicycle route these days.

You can think about how the Dutch are very much planners, too. Their cities are planned and the country is carefully laid out. Lots of other countries come here to see how they’ve done things. I would have never found out about that or realised that if I hadn’t lived here long enough to see how often the Netherlands plays an important role in many things that have been taken on by the whole world throughout history and in current times.

If you had just 24 hours left in the Netherlands, what would you do?
I guess I would bike around Amsterdam and go to as many different neighbourhoods as I could. I would take in their atmospheres and definitely stop in at a few cafes. I’d  just sit with the people there and chat with them before moving on to the next one.

I really like the Jordaan, and there’s a cafe there I like called Cafe ‘t Papeneiland. If you go there around borrel time in the afternoon, there’s definitely a lot of locals hanging out and talking with one another. There’s a certain neighbourhood familiarity among the people there, but there’s more and more tourists because of people like me mentioning it.

But that’s okay. It’s a nice place and the tourists who come in, more power to them. They go in and get the same treatment as everyone else. It’s located on a nice corner of the Brouwersgracht. The cafe has big, tall windows and you can just sit there and enjoy the scenery. At one point, Bill Clinton also visited the place. He had their appeltaart. I’ve never tried it, but I guess it’s pretty good.


You can learn more about Frank’s Smoke House via its website.


Frank was talking with Brandon Hartley.