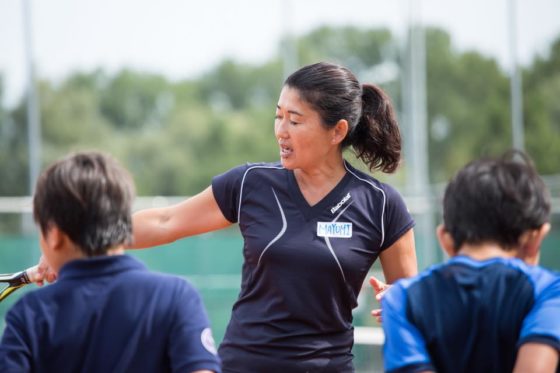 Mayumi Konishi is originally from the island of Kyushu in Japan. She first came to the Netherlands while serving as a coach for a group of junior tennis players. She now lives in Amstelveen, loves French fries with mayo and would like to meet kickboxer Ernesto Hoost.


How did you end up in the Netherlands?
I first came here in 2004 for a junior tennis trip. I was with a group of players of between eight and ten years old and most of the kids were the best in Japan. We came to Europe for two weeks and also stayed in Wimbledon to see the tournament. I thought, ‘Wow, the Netherlands is such a nice country.’ So many things were different to Japan. That’s why I decided to come over here.

When I first came here in 2004, I stayed for three years before moving back to Japan.Then, five years later, I moved to Barcelona in Spain for a year and finally I came back to the Netherlands in 2013.

How do you describe yourself – an expat, lovepat, immigrant, international?
I would choose expat. I am just working here as a tennis coach.

How long do you plan to stay?
Well, actually, I hope I can leave whenever I want to. [laughs]


Do you speak Dutch and how did you learn?
No, I don’t, unfortunately. I do speak a little bit — klein beetje. I’ve tried to learn and catch up to Dutch, but I just couldn’t get it. I don’t know why. I’ve been to a language school three times in three seasons here in Amstelveen. I’ve also had private lessons. I can count in Dutch and listen to Dutch, but I can’t speak very well.

What’s your favourite Dutch thing?
Well, my favourite Dutch food is friet with mayo and peanut sauce. The other thing I like is biking. Everything is flat here, and you have bike lanes all over the country. I can go everywhere on a bike and safely. In Japan, we have really narrow roads and it is neither comfortable or nice to ride a bike. But here more people ride bikes than drive cars.

How Dutch have you become?
When I’m working and I talk with Dutch coaches, they are really more simple and open in their approach. I like it. People always smile a lot, too. I feel like I smile more now. Things like that are completely different compared to Japan.


Which three Dutch people (dead or alive) would you most like to meet?
Kiki Bertens. She is a tennis player, but she quit playing last year, I think. She’s one of the best Dutch women players. When she stopped playing tennis, she said ‘you know, it’s not only tennis in my life.’ I liked that. When I stop playing tennis, I will do something else as well.

Ernesto Hoost. He’s a kickboxer. In Japan, we have K1 which is combination of kickboxing, judo, everything. When I first saw Ernesto, it reminded me of that. I was really into his footwork. I would want to compliment him about it.

Boyan Slat. He’s the CEO of Ocean Cleanup. He’s amazing. When he was 16 or 17 years old, he started planning and began collecting plastic from the ocean. He organised everything and created a machine to catch the plastic. I would want to meet him because I also did ocean cleanup in my country, in Miyazaki. It’s a city by the sea. I did it by myself and by hand, but I couldn’t think of a better way to do it. I was hoping someone else would and it wound up being this Dutch boy. He’s amazing.


What’s your top tourist tip?
I think people should go to a tulip farm and see a windmill. There is a windmill in Amstelveen, but I’ve never been inside it. I recommend that they visit the Keukenhof near Lisse. There are also the windmills in Zaanse Schans. I usually take people there because it’s very close.

Tell us something surprising you’ve found out about the Netherlands.
There’s a lot of stuff I found surprising, especially when I first came to the Netherlands. For starters, the Dutch are tall, very different from me, and I’m not considered that short in Japan. I’m 168 centimetres tall and when I’m standing on a street there, I tower above everyone else. So this is a different world for me.

Also when people are sleeping in their houses, even in the winter, they have a window open. I had to share a room when I first came here. I asked, ‘Why are you opening the windows in the wintertime?’ ‘It’s for fresh air,’ I was told. What? That was a surprise.

And then when the Dutch go to the supermarket, they are always do a big shop. That’s super amazing to me. They buy two litres of milk, five packs of bread, and things like that. In Japan, you usually go to the market every day and buy only a few things. But I’ve been living here for almost 10 years and now I do the same.

If you had just 24 hours left in the Netherlands, what would you do?
I would  go to a music club by bike with friends to have drinks and dance to nice music.

You can learn more about Konishi Sports via its website.

Mayumi was talking with Brandon Hartley.