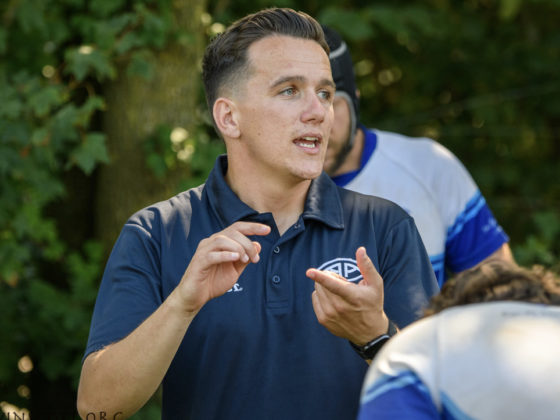 Cameron Jinks (30), originally from Northern Ireland, came to the Netherlands after being offered a spot at a Breda amateur rugby club. After googling the city, and deciding he liked what he saw, he moved to the Netherlands. He’s now a tech recruiter and a coach for the first team at Amsterdam rugby club AAC and has no plans to move anywhere else.

Well, 10 years ago I was still living in Northern Ireland I didn’t know what I wanted to do. A lot of my friends were going off to different places, Australia and so on. I’ve always played rugby, and a Dutch guy was scouting for an agency to play in amateur rugby overseas.

I was interested in playing rugby in the Netherlands and I started playing for a club in Breda. I  spend 18 months there. I went back to Northern Ireland to find a career and became a tech recruiter, but I always wanted to go back to the Netherlands. Five years ago I found a job in Amsterdam, I’m now a tech recruiting manager at Uber.

How do you describe yourself – an expat, lovepat, immigrant, international

I’ve not really thought about it, but I would say an expat. I guess I am an immigrant in some sense of the word. I protest embedding fully into Dutch society as I want my kids to feel Irish as well as Dutch. So I’ll go with international or expat.

I have no intentions of going back. In Northern Ireland, you have an Irish passport and a British passport, so luckily, I wasn’t affected by Brexit. I want to bring the kids up here. My girlfriend is half German, she wanted to live in Germany, but the Netherlands is a good compromise. It’s a super international, diverse community, safe, and clean.

I speak a bit, I can do some basics like ordering at a restaurant. I get compliments for my Dutch accent, but I struggle with the structure. I did two or three courses through work, the first two were in person at the Uber office, and I got a great deal of value from them. You all feel a bit stupid together. The third was all on zoom, and I hated it. I’m planning to do another course at some point.

You probably get this answer all the time – the bike. You’re never late for work because you’re not sitting in traffic or waiting for a train. It’s great. And people will laugh, but I like the weather. You get much clearer seasons. Yes, you still have rubbish weather where it’s grey and wet, but in Ireland, it’s grey all year round. If the weather were any nicer, even more people would come and live here.

Ooft, I would give you one answer and my friends would give you another. I don’t feel Dutch, even if I stay here I will always be an international. I still want to exercise my opinion and vote, but don’t feel Dutch. But I do feel fully integrated. I get into the airport in Amsterdam, and I feel like I’m coming home.

Which three Dutch people dead or alive would you most like to meet?

Johan Cruyff because he’s such a legend in Dutch sports, and he played such a pivotal role in Football. Mark Rutte, I do quite like him and I feel like he’d be a great person to have a coffee with. And I’d say, Vincent van Gogh. Imagine. I’m not a huge art fan, but that would be impressive. I would love to have a glass of wine with him, shadow his paintings and ask him some questions about what he sees.

Get out of the centre of Amsterdam and the red light district. Experience the real neighbourhoods, like De Pijp. See what it’s really like for people who live here. I have friends who say, ‘You live in Amsterdam, that must be crazy’, but no, it’s really not like that when you live here.

How well organised everything is. The Netherlands is fond of bureaucracy, well structured and organised. However, another thing that surprised me was the lack of maternity leave mothers get. My partner gets 16 weeks of maternity leave, which was striking to me because you get more in the UK. She felt the pressure to go back to work. Legally don’t have to go back then, but you don’t get paid. It felt wrong.

If you had 24 hours left in the Netherlands what would you do?

I would probably go for a beer tour in the Jordan and de Pijp. I love a brown bar, you’ll probably find me most weekends in a local place, having a vasje, eating some bitterballen and fries. I would also spend my time soaking up the atmosphere at the rugby club.

Cameron will be in action at the Amsterdam 7s rugby tournament on June 4 and 5. You can buy tickets online with a 20% discount quoting DN2022.

Cameron was talking to Chloe Lovatt