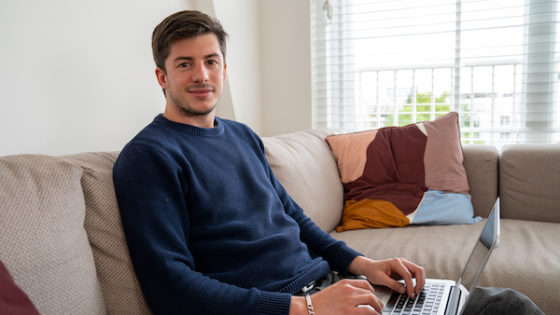 Milos Mandic grew up in Belgrade and lived in the UK and the US before relocating to the Netherlands. After the pandemic forced him to stay put in Amsterdam, he used his spare time to build Socializer, an app that helps its users expand their social circle. He would like to go for a cycle ride with Mathieu van der Poel and wishes he’d known about hagelslag as a kid.


How did you end up in the Netherlands?
Pretty much by accident. I used to live in London. After three years there I received an interesting job offer, but it required me to move elsewhere in Europe. I had a few options and Amsterdam wasn’t my first one. I actually wanted to move to Paris, but after a few conversations with the recruiter, I decided to give Amsterdam a go. I made a decision to move here and see how it would go. That was in 2019.

How do you describe yourself – an expat, lovepat, immigrant, international?
It’s hard to put a name to it, really. I grew up in Serbia and after spending twenty something years there, I moved to the UK. I spent some time there and I also lived in the US for a bit. I finally ended up in the Netherlands. I would say that I’ve picked up a lot of things from different cultures.

I often think about what home is. At the moment, it’s the Netherlands. My parents and my brother are still in Serbia. That’s also a bit of a home, but a lot of my friends are in London. So, yeah, it’s hard to put a name to it, but I would say I’m a bit of everything.

How long do you plan to stay?
At first, I didn’t have any plans. I just moved here for work and wanted to give it a go. I didn’t even buy any furniture. I was renting an apartment that was fully furnished with no clause to have to stay for a longer time period. I had been travelling a lot in that first year, was almost never in the Netherlands, and then COVID-19 started.

With it, things started to change. I had to stop travelling. Then I met my girlfriend, started working on Socializer, and met more friends. So I would say, at this stage, I plan to stay here. Things can always change though. It’s not written in stone that I have to stay, but I’m definitely happy where I am.

Do you speak Dutch and how did you learn?
I speak very, very basic Dutch. Initially, I didn’t even consider learning it. But after spending three years here, you start picking things up. You obviously have to navigate through life. I would say I’m pretty good at understanding Dutch; reading and listening as well. I’m not feeling too comfortable talking, but I started with Dutch lessons a couple of months ago. I’m getting better at it.

It helps that my girlfriend is Dutch. I would say I’m on a good track to become fluent in a year or two. I also use Duolingo, but only occasionally. It doesn’t work that well for me. The course that I started is quite structured and intense. That’s the best way for me to learn.

What’s your favourite Dutch thing?
There are many, many things, but the first thing that comes to mind is directness and honesty. It’s nice to live your life where, most of the time, you’re able to say what you think and just kind of be direct with people. This is the thing that I enjoy the most, but there are small things as well. Things like cycling everywhere and a bunch of other things, but directness is probably my favourite.

How Dutch have you become?
I’ve definitely picked up some things from Dutch culture. I’ve already mentioned the directness and cycling everywhere, regardless of the weather conditions. Then there’s the food, some of which is quite peculiar. Herring once a week is almost a must for me. When the sun is out, like it’s been for the past few days, I drop everything as soon as I can and go out to soak up some sun. I’m also actively learning Dutch.

But there is some stuff I don’t plan on accepting or I simply prefer from other cultures. Things like going to the doctor here. That’s something I still can’t fully comprehend. Or better said, not going to the doctor until it’s really, really serious.

Not having spontaneity is hard. It’s convenient for me to be able to text my friends and ask what they’re doing today or if they want to grab a drink after work. Oftentimes I get pushback that it’s necessary to plan it a week or two in advance. But that’s not how I grew up, so I’m still struggling with that.

Which three Dutch people (dead or alive) would you most like to meet?
André Rieu. Actually, my parents discovered him a few years ago. They went to his concert in Austria and later to another one. So I started listening to his music performed with different orchestras. The atmosphere that he makes at these concerts is incredible, especially since he speaks only a few languages but also can connect with people who don’t understand him.

Hendrik Lorentz. I used to study Electrical Engineering. I struggled quite a bit with the Lorrentz transformations and various mathematical equations he derived. It would be great to have a conversation with him and try to understand how he managed to get to these findings.

Mathieu van der Poel. He’s a cyclist, and he’s quite good and versatile from cyclo-cross to road cycling. He was even wearing a yellow jersey for a few days at the Tour de France. It would be really, really nice to talk to him but maybe even better to go for a bike ride and see how I match up.

What’s your top tourist tip?
When I visited Amsterdam for the first time, I had different expectations than now when I live here. I would probably first tell the tourists what to avoid. Going to the centre, the coffeeshops, the Red Light District; I would say they shouldn’t necessarily avoid them, but they shouldn’t focus too much on it. I would suggest they should go out of Amsterdam for a day or two at least, because the Netherlands is so much more than just Amsterdam.

Then there are the markets on Saturdays, the parks, and there are a lot of small, local places that I like here in Amsterdam. My favourite place during the summer is Oedipus, the brewery in Noord. I aim to go there once every couple of weeks to get a drink. They have fantastic burgers as well. There’s also a brunch place in my neighbourhood that’s great, but you typically have to book two weeks in advance. It’s called Staring at Jacob. It has delicious food and a great vibe. On Sunday mornings, it’s packed with locals and has a good atmosphere. I guess food is on the top of my list.

Tell us something surprising you’ve found out about the Netherlands.
The most surprising thing was hagelslag. I wish I had known about it when I was a kid. I would have probably wanted to have it for every meal. As far as I understand, people take those little chocolate chips, put them on bread with butter, and have them as a meal. It would have been amazing when I was younger, but now I don’t eat that many sweets. I still can’t believe it’s a thing!

If you had just 24 hours left in the Netherlands, what would you do?
I would try to wake up early and use most of the time I have. I would actually go for a nice bike ride, probably around 70 to 80 kilometres, either towards the south or towards the beach.

I’d try to get back by brunch time and go for a nice meal with close friends and have some nice food in a good atmosphere. From there, I’d move on to hit a couple of bars, have a few beers, and probably end the night at my place. I would throw a party on the rooftop for all the people I’ve met so far in the Netherlands and celebrate there until the early hours.

You can learn more about Socializer by visiting its website.

Milos was talking with Brandon Hartley.