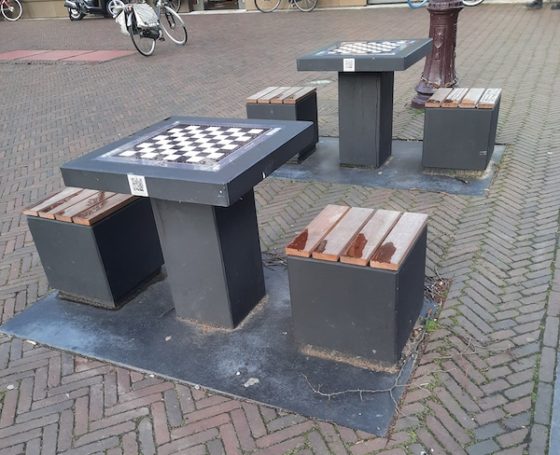 24oranges.nl, the blog that is now a column, continues to bring you odd and fun Dutch things pressed for your pleasure.

My grandmother was Ukrainian and my grandfather was Belarusian. During the Russian Revolution, they both fled to Canada. One thing that was passed down from them to me was playing chess, taught to me when I was three years old. The Old Slavic word for chess, шахматы (‘shahmat’), comes from the Persian for ‘the king [shah] is dead’ and it’s also where ‘checkmate’ comes from.

Playing chess outside is increasingly becoming a Dutch thing in part thanks to Jesús Medina Molina, the founder of Urban Chess. One day while jogging, he thought there should be chess tables outdoors. He began convincing local councils to install chess tables in parks, some of which are also wheelchair accessible.

Inspired by his daughter who had trouble with arithmetic, Medina Molina learned about how chess had a positive effect on children’s brains. Chess helps overcome loneliness, improves problem-solving skills and makes people get out more. On April 2 in Apeldoorn, Park Zuidbroek will inaugurate its new chess board. Medina Molina is also pushing for some chess tables in Amsterdam’s Vondelpark.

A galaxy near you

An international team of researchers led by Dutch PhD student Martijn Oei has discovered a radio galaxy that is at least 16 million light-years long, making it the largest structure made by a galaxy to this day. This is a ginormous deal because scientists had never seen a structure this big made by a single galaxy. It also disproves some long-held hypotheses about the growth of radio galaxies. 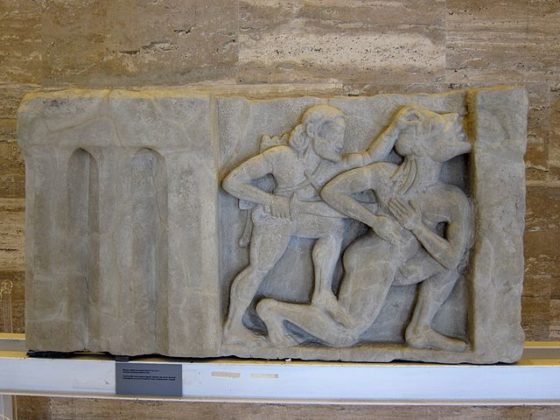 Hercules and Alcyoneus in stone, not space. Photo: Velvet via Wikimedia Commons

Named Alcyoneus, the radio giant is three billion light-years away from Earth. Alcyoneus was a giant that fought against Heracles and other Olympians for supremacy over the cosmos. Despite the mind-boggling distance, the giant looms as large in the sky as the moon, an indication that the structure had to have a record length. What has given Alcyoneus its record length, still remains a mystery.

From Bletchley Park to Alan Turingpark

Speaking of cracking codes, the port city of IJmuiden, home to one of the largest sea locks in the world, recently opened the Alan Turingpark, named after British mathematician, computer scientist and cryptanalist Alan Turing who was instrumental in helping defeat the Germans in WWII. Turing was also a gay man who was mistreated by the state, making him a tragic symbol for LGBTQIA emancipation.

Remy and the Machines

Harpist Remy van Kesteren, considered one of the world’s best harpists, is currently touring Dutch theatres with 30 robots. Remy & The Analogue Robot Orchestra is made up of ‘music boxes’ controlled by Remy while he’s at the harp.

The idea came to him six years ago at music festival Into The Great Wide Open on the island of Vlieland where he met robot builder Jurjen Alkema. They clicked, and the rest is music. The orchestra plays their own compositions and covers.