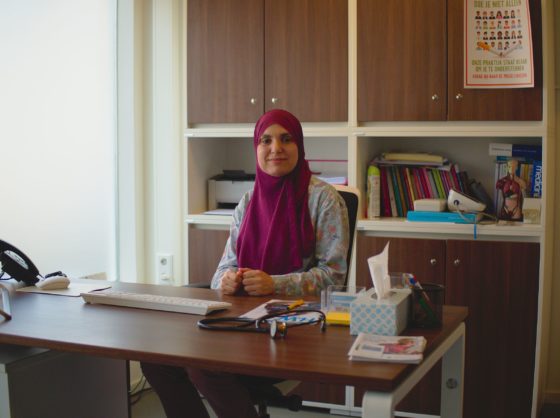 Dr Amekran in her practice

The doors to the Amekran health clinic in The Hague’s Laakkwartier are almost always open, allowing anyone living in one of the Netherlands’ most diverse neighbourhoods to drop in for advice. When that door was closed by coronavirus last year, the clinic found itself the point of contact for essential information for the nearly 80 nationalities who live there.

Family doctor Ouafae Amekran has been working in the area for 12 years and sees herself and the clinic as a part of the neighbourhood.  ‘With the door always open, the threshold for our patients was always very low,’ Dr Amekran says. The walls of the clinic have posters about illness prevention and community care, a clear message that this clinic provides more than just a quick appointment.

But when the clinic closed for visitors, the phone calls poured in. ‘At the beginning of the lockdown, we were overwhelmed with calls,’ Amekran says.  ‘I heard that this wasn’t the case with colleagues working in other neighbourhoods with a higher SES (socioeconomic status). In fact, they said that it was suddenly very quiet for them.’

The Laakkwartier was built in the 1930s and today has around 40,000 residents. Although gentrification is beginning to force some families out of the neighbourhood, some 70% of the district’s residents have an ethnic minority background and the average income, according to city council figures, is around €18,000 a year.

The coronavirus pandemic, says Dr Amekran, has highlighted the challenges that neighbourhoods such as Laakkwartier face. At the start of the pandemic in particular, the lack of information in languages other than Dutch boosted the surge in demand for information. This put additional pressure on Dr Amekran and her colleagues as confusion about the pandemic swept the district.

‘There was resistance – people didn’t understand why they suddenly needed to do things online, for instance. Some didn’t have email addresses,’ she says. ‘Digitalisation really picked up speed last year, and not everyone can keep up. That’s something that needs tob e addresssed.’ Public health experts have warned that rapid efforts to digitalise can increase inequality between patients unless steps are taken to remedy this.

The clinic did not receive any extra financial support from the government to cope with these new tasks. In fact, Dr Amekran says, the support from the Dutch state in terms of PPE was almost non-existent.

‘How am I supposed to protect myself? How do I prevent myself from bringing Covid back to my family’, she remembers colleagues asking her as the pandemic was taking hold.

‘There was no PPE, I couldn’t order it anywhere,’ she says. ‘I found that very difficult – at that point I really had to swallow and make difficult decisions. I felt totally abandoned by the state.’

While there are abundant resources for highly educated Dutch speaking people about the pandemic, these were often not suitable for Dr Amekran’s patients. ‘There is, of course the website thuisarts.nl, but if you’re less literate in Dutch, or don’t know that the website exists, then you just can’t access the information the way that higher socioeconomic status patients can,’ she points out.

She and the rest of the team had to fill this information gap, reassure patients and communicate about the risks of the pandemic, while still providing some form of care from a distance.

As the pandemic progressed, Dr Amekran says she began questioning what it meant being a doctor. It’s about understanding not only the patient’s illness but their family circumstances, their home, their wants and desires, and their humanity, she says. ‘I’m not only a doctor of medicine, but also a doctor of context.’

She stopped treating six patients an hour, despite the financial impact and the external pressure from insurance companies to keep her patient-load as high as possible.

‘As a doctor, we must stand by our patients,’ she says. ‘We must also pay more attention to the less literate population of the Netherlands.’

The medical community has been ignored and politicians have abandoned doctors in the Netherlands, Dr Amekran feels. The high workload, lack of respect and support from the Dutch state, and the general time pressure at the expense of patients have prompted many of her colleagues to leave the medical profession.

The decision to reopen the country based on often inaccurate fast tests and the decision to largely abandon the use of face masks, plus the luke-warm apology from the prime minister about the surge in new cases, are, she says, more examples of the medical community being swept aside for the sake of reopening and ‘normality’.

Another problem Dr Amekran has faced in this period of the pandemic is the considerable reluctance to get vaccinated.

The vaccination campaign in Laakkwartier had a rocky start as family doctors only distributed the AstraZeneca vaccine and confusion about its safety led to many more questions from patients.

Turnout at the clinic has only been around 35% although 60% of those eligible for the AstraZeneca vaccine showed up for their appointment.  Dr Amekran is aware of at least one patient who decided not to get vaccinated and who subsequently died from coronavirus.

We must remain aware of the fact that ignoring doctors has consequences which can have far-reaching effects on people’s lives.  ‘We doctors are not heard until we start a petition,’ she says. ‘And in the meantime, people die. We mustn’t forget this.’