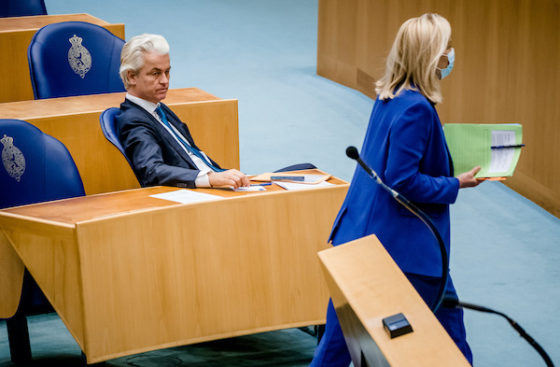 As insults fly across the parliamentary debating chamber, D66 leader Sigrid Kaag says mutual understanding, patience and a willingness to listen are essential in a healthy democracy.

Chief coalition negotiator Mariëtte Hamer raised a few eyebrows when she said the coalition talks could do with a bit of cheering up. Some peole took it as sign of impotence at a time which demands great seriousness and a sense of urgency. The climate crisis is not very jolly, after all, and neither is the dire state education is in. Nor is the Netherlands going to improve its stature in Europe if its politicians suddenly smiling more often.

But many thought Hamer had a point. My own interpretation of it was that Hamer was echoing Tjeenk Willink’s analysis in his final report on the first round of the coalition talks when he said: ‘The democratic legal order is based on trust and restraint. But it looks as if trust and restraint have been replaced with distrust and escalation’.

Trust is always better than distrust. Mutual understanding, patience, a willingness to listen before you speak – all these are essential in a healthy democracy.

C’est le ton qui fait la musique, as the French so aptly say. I have been shocked, concerned and disappointed about the radicalised tone on the flanks of the political debate.

PVV leader Geert Wilders equated a population group with ‘poison’ while a civil servant was intimidated by calls for her resignation from Thierry Baudet’s Forum voor Democratie. One left-wing MP called his colleague a ‘drunken cucumber’. Escalation and accusation are the trend, without any thought for responsibility, let alone the safety and integrity of the people who are being targeted.

Intimidating and insulting rhetoric, multiplied by the social media algorithms can endanger individual politicians and people in the public eye.

I am particularly concerned about the safety of ordinary citizens. Studies have shown that hate crimes against Muslims increased by a third following  Donald Trump’s anti-Muslim rhetoric in 2016 which was widely disseminated by the social media. When he started calling Covid-19 ‘the Chinese virus’ the number of hate crimes against Asians also went up.

What leaders say matters. Words matter. They can wound and destroy but they can also heal and protect. That is why a dignified response is essential. But of course, it is not always easy to come up with one, and I should know. I have not always taken my own advice and there have been times that good intentions floundered in the heat of the debate.

It happened during the most recent debate on the coalition talks, for instance, when Geert Wilders accused me of sympathising with IS terrorists. I was so shocked and angry I responded with an ad hominem reference to the polls. (Kaag said an ‘undeserving’ Wilders ‘would plummet in the polls’, DN).

Setting a good example helps. Trust and restraint in politics will temper escalation and polarisation in society. If MPs want to serve the public they will have to change the way they relate to each other. One way is to change the rules of the game. But at the heart of this change is political behaviour itself.

The essence of politics is to listen to others and to muster respect and decency, not to think the worst of anyone right from the start. We all want a better country and we all want a better future. What that means and how we get there is a battle of views and ideals. But it can never be a battle of tribalism, insinuation and bitterness. A battle of extremes will endanger democracy itself.

If we want to avoid this – and we must – we need good will. Empathy, trust, restraint, and yes, why not, a bit of cheer.