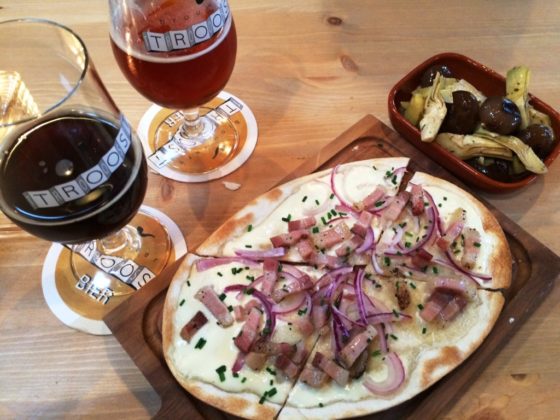 The Dutch tradition of brewing beer goes back centuries, when there were hundreds of breweries fermenting their own, unique brews. Gradually, a few big players took over and the Netherlands became primarily a lager-producing country, until only 15 breweries were left by 1980.

Fortunately for us, all that has now changed and Dutch micro-breweries have reclaimed their rightful place at the pinnacle of the beer world – brewing everything from blonde beers to bock beers and from IPAs to porters.

But all that beer drinking makes a person peckish… How to soak up the alcohol in between vaasjes? We’ve rounded up the best breweries in Amsterdam that also serve food to hungry beer drinkers.

Troost has three locations in Amsterdam, but it’s the brewery in Westergasfabriek that’s the most impressive. With its high, vaulted ceilings and vast, towering beer tanks, Troost makes you feel like you’re practically part of the brewing process. Seating is at long wooden benches and tables, which gives the whole atmosphere rather an Oktoberfest feeling.

Troost’s own-brewed beer menu has a bit of everything, including pilsner, IPA, bock, white and triple. Plus, they’ve also started making home-brewed soft drinks, like lemonade, ginger beer and tonic, for those who are avoiding alcohol.

Food-wise, Troost’s flammkuchen are a particular draw, with the traditional toppings of speck, chives and red onion, or with spinach and feta for a vegetarian take on the German classic. Although they do an excellent burger, their food in general is a cut above the regular pub grub, with plenty to tempt vegetarians as well as meat eaters, and kids as well as adults. Better still, the menu features beer-pairing advice, so you can pretend you’re being classy rather than just getting sozzled. 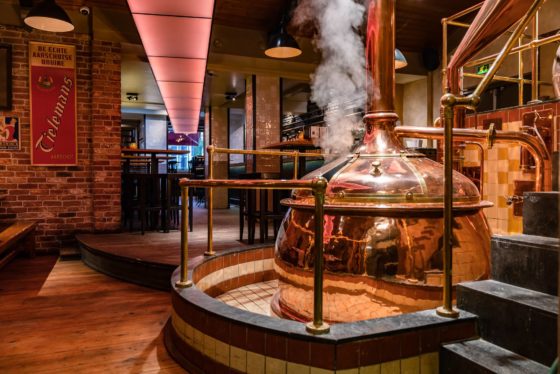 An oldie but a goodie, De Bekeerde Suster has been a cornerstone of the Nieuwmarkt for decades – long before craft beer became fashionable. Today’s tasting room and café sits on the site of the former Bethanienklooster – an abbey that was home to fallen, and subsequently reformed, women.

This history is what gives De Bekeerde Suster its name (literally: the reformed sister) as well as being the inspiration behind the titles of the beers brewed there: Witte Antonia (white beer), De Blonde Barbier (blonde beer), De Manke Monnik (triple beer), KloosterIPA (India Pale Ale) and Vintrus 2019 (dark beer). All of which are brewed in the beautiful copper stills that you can still see behind the bar.

To eat with your beer, De Bekeerde Suster serves a range of borrelhapjes – including some delicious trappistenkaas (abbey cheese) – as well as burgers, spareribs and so on. It’s the usual Dutch café fare but it’s done well and service is both efficient and friendly.

With both South African and German roots, the Lion’s Head menu features Bavarian-style pork knuckle that feels like it’s come straight out of the beer halls of Munich alongside Durban-style bunny chow and Cape Malay bobotie. A refreshing change from the usual beer snacks that appear on Dutch menus. 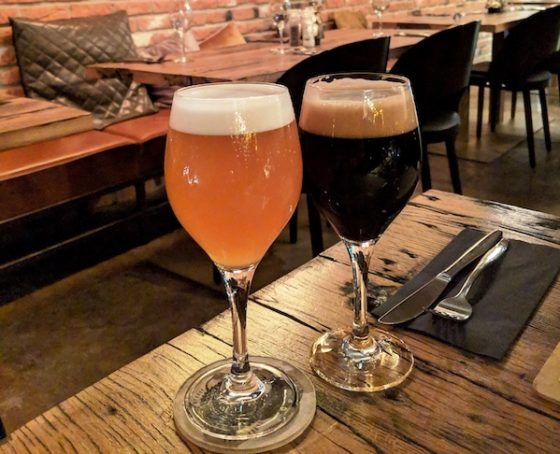 The Lion’s Head Brewery’s beers are just as creative: try the watermelon wheat beer, the Frau Schulz blond ale or the African Queen IPA – all brewed on location at Van Woustraat. The restaurant and brewery are run by a lovely husband and wife team, which means the service is also a cut above. Plus, if you’re a sports fan, you won’t be disappointed – plenty of games are broadcast live on TV in the bar.

In the middle of its large location on the Nes, Bierfabriek houses its own micro-brewery forming the impressive centrepiece to the restaurant. Bierfabriek’s brew master has crafted six beers, including the Vals Alarm (a smooth red ale), the Schafttijd (a hoppy IPA) and the Puur (their own signature pilsner).

To eat, it’s all about the chicken. Bierfabriek’s signature poussin is marinated for 24 hours, slow-roasted and served simply with little more than Dutch fries, sauce and salad. Yes, there are other dishes on the menu nowadays, but why bother with them when the chicken is this finger-lickin’?

With its iconic colourful labels, you’ve probably seen (and possibly drunk) Oedipus Brewing’s beers, even if you’ve never visited its taproom. In Amsterdam Noord, however, you can visit ‘the vibrant heart of the brewery’ where the brew masters ‘try out new things and discover celestial flavors and colors unheard of,’ according to the Oedipus website. And we couldn’t have put it better ourselves. 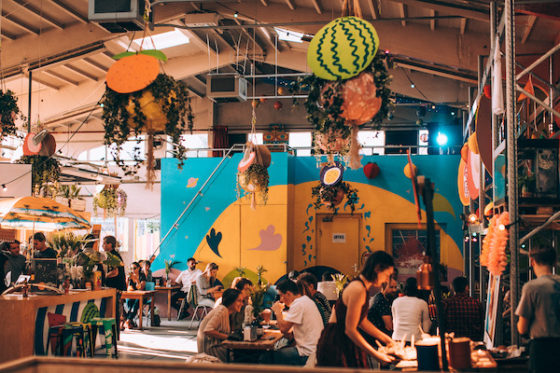 What’s more, Oedipus has partnered with The Beef Chief to serve up what are arguably the best burgers in town. They’ve won awards, so it would be rude not to try them. You can wash down your burger with one of 11 beers that are named as colourfully as their labels are designed: Mannen Liefde, Poly Amorie, Swingers and Panty are just four of the risqué brews on offer. Oedipus Brewing is not for the easily offended.

Suggestions for breweries with good food away from the capital? Please email editor@dutchnews.nl