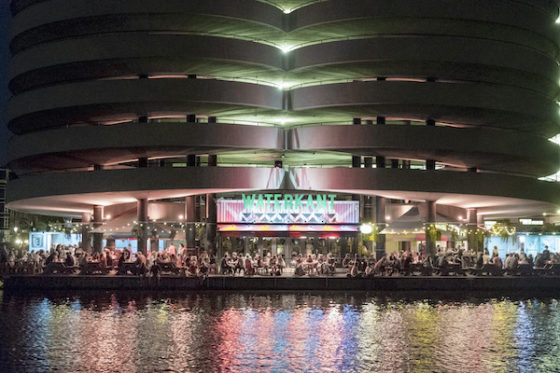 Dutch weather can be a fickle beast. But one thing’s for certain: as soon as the sun comes out (or even when it doesn’t) the Dutch will be outside in force. Eating and drinking overlooking one of Amsterdam’s hundreds of waterways is practically a civic obligation.

So we’ve rounded up 10 of the best restaurants with waterside views for you to visit this summer. Most come replete with sunny terraces, but some offer indoor dining with canal views for those chillier days.

The clue is in the title at Waterkant, which literally translates as ‘waterside’. Overlooking the Singelgracht, Waterkant brings a slice of Paramaribo to Amsterdam, with its Surinamese menu and drinks. Try the broodje bakkeljauw (salt cod sandwich) for lunch or one of the spicy roti rolls for dinner. Wash it all down with a Surinamese beer and watch the boats glide past on the canal.

With views over the majestic Herengracht, you might not even notice the famous CoBrA artworks that adorn the walls of Brasserie Ambassade – a stately canal house that may be centuries old but is now in perfectly restored shape. 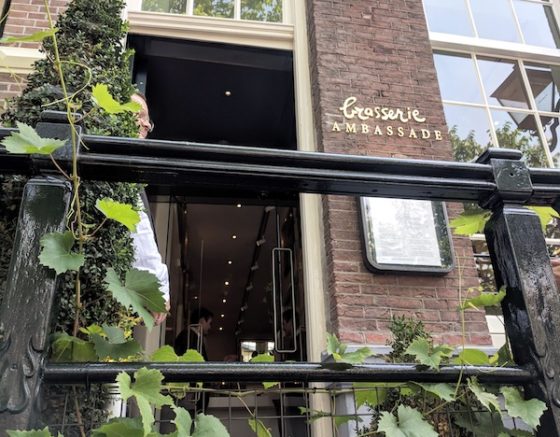 Because of pandemic-related restrictions, Ambassade has been allowed to extend its terrace over the canal, making the experience even more special. The menu is broadly French but ‘with a modern twist’, using local and seasonal produce wherever possible.

Also on Amsterdam’s historic Canal Belt you’ll find leafy, cosy Spanjer en van Twist – a café whose terrace nestles down right next to Leliegracht. Cool and shady in the summer, it’s a relaxed and unassuming venue that’s been around for decades. Serving breakfast, lunch and dinner, Spanjer en van Twist’s menu is simple eetcafe fare but well executed. You can also just stop by for a drink if you don’t fancy a full meal. An old favourite in the heart of the city’s waterways. 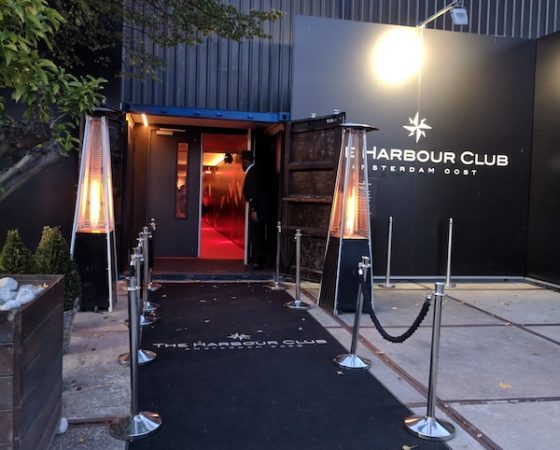 The place to see Dutch celebrities or be seen (if you are a Dutch celebrity), The Harbour Club is one of the few places in Amsterdam where getting dressed up feels appropriate. The Harbour Club has two locations in Amsterdam, one in the Hague, one in Rotterdam and one in Vinkeveen. Unsurprisingly, those in Amsterdam Zuid and Oost boast fantastic waterside terraces over whichever ‘harbour’ they happen to flank. The food and drinks are pricey, but you’re really here for the atmosphere and the people-watching. Don’t forget your heels.

Hanneke’s Boom has had one of the most sought after terraces in Amsterdam for many years now – not least because it’s accessible via boat. Simply moor up and order your drinks and hapjes. But now you no longer need your own boat to take advantage of Hanneke’s dockside location. Instead, you can hire Hanneke’s Boot (boat) for your very own event right there on the Oosterdok. It’s suitable for groups of 40 to 200 people, so ideal for all those big celebrations you’ve been postponing because of the pandemic. 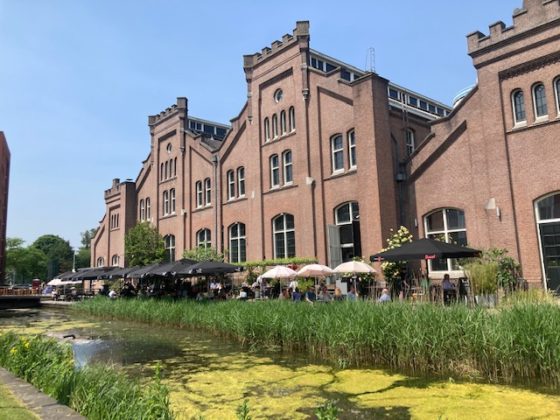 Further out of the centre in West, Café-Restaurant Amsterdam is housed in an old water pumping station, which is impressive enough from the inside. Outside, however, you’ll find a large terrace overlooking the water – a serene way to while away an afternoon or evening. The menu is very classic – think steak tartare, Caesar salad, crab cocktail and steak-frites – which is something of a rarity these days in hipster Amsterdam.

An entirely different type of boat is Pont 13: an old GVB ferry that used to shunt passengers across the River IJ, subsequently converted into an atmospheric bar and restaurant a few years ago. Now docked permanently in the Houthavens, Pont 13’s maritime charm feels like it’s a world away from the bustling centre of the city. The menu is loosely Mediterranean, and the restaurant has a charcoal grill, so you can expect grilled meat and fish to feature heavily.

In the same neck of the woods as Pont 13, you’ll find former pirate tv broadcasting station REM Eiland. ‘Waterside’ is perhaps an understatement – it’s more ‘watertop’. REM Eiland’s towering structure sits above the River IJ, with soaring views over the water in all directions. 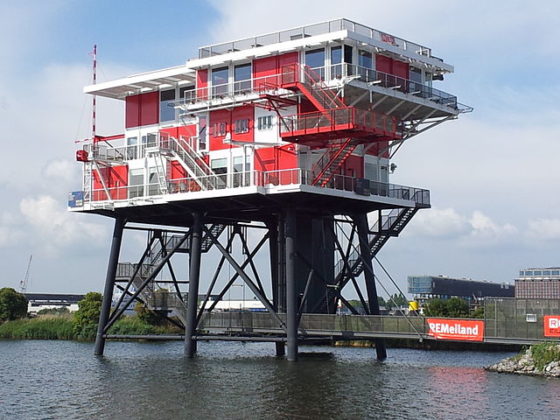 While it used to broadcast TV Noordzee back in 1964, nowadays you can eat a modern European menu of meat, fish and vegetarian options while gazing out over the industrial terrain of the Houthavens (which is itself now being revived as a gentrified area to live and work). The terrace on the top deck is particularly sought after on sunny days – so long as you have a head for heights.

On the opposite side of the River IJ, in Amsterdam Noord’s post-industrial heartland, several sprawling restaurants extend along the waterfront in converted warehouses. One of these is Café-Restaurant Stork, a fish and seafood restaurant with an absolutely enormous south-facing terrace. Rock up in your boat for oysters and bubbles or a full fruits de mer platter. With the sun shining, the waves lapping and the drinks flowing, Stork definitely has that holiday vibe.

Also in Amsterdam Noord but on the NDSM Wharf side of the neighbourhood, Pllek is perhaps most famous for its urban beach. You can dig your toes into the sand while looking out over the water to the skyline of central Amsterdam. If it’s not warm enough to sit outside, the interior at Pllek is equally atmospheric. 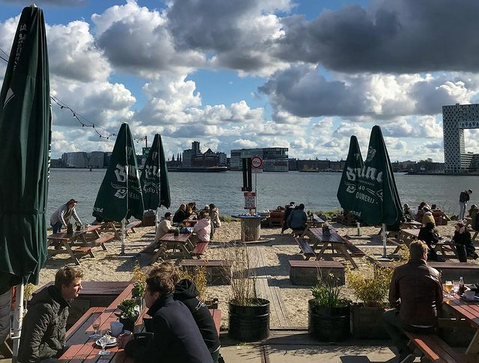 The restaurant is made up of a series of metal containers, and in winter there’s a huge fireplace in the middle around which to congregate. The menu focuses on sustainability, with plenty of vegetarian and vegan dishes. Pllek also has an interesting programme of events, including music, yoga and more.