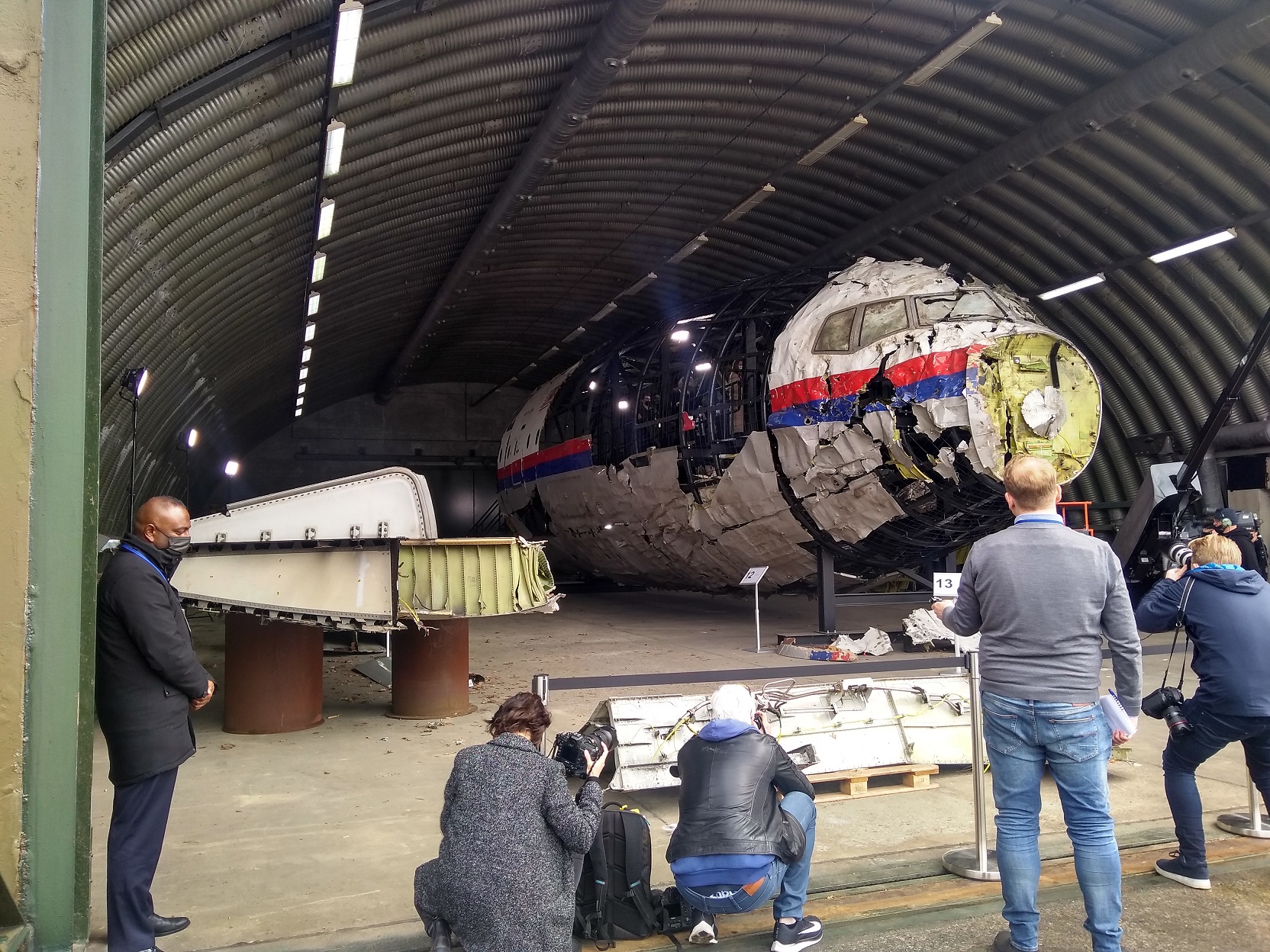 Photographers take pictures of the wreckage during the site visit. Photo: Molly Quell

This July it will be seven years since a passenger jet taking nearly 300 holidaymakers to Kuala Lumpur was shot down over eastern Ukraine. Molly Quell is covering the trial.

It was my first time in the location of a mass murder.

I spend most of my time covering international law, including the International Criminal Court and the International Court of Justice, which try cases of war crimes and genocide. So I am not unfamiliar with large-scale atrocities. But standing in the reconstructed cockpit of downed passenger jet MH17 was something else entirely.

The Dutch public prosecution service has charged four men with 298 counts of murder for bringing down the Boeing 777. Preliminary hearings in the trial started in March of last year and the trial will start on the merits in June.

At the request of the prosecution, the entire court – judges, lawyers, press and all – decamped to the Gilze-Rijen Air Force base, outside of the southern city of Breda, to examine what remains of the plane.

A reconstruction of the wreckage of MH17 by the Dutch Safety Board.

Before Wednesday, I had only seen photos of the wreckage. Mostly a close-up shot of the plane’s remaining nose, a piece of bright yellow, dented metal, that many media organisations have used to accompany their stories about the tragedy.

The reconstruction stretches back about 20 metres into an airplane hangar. The parts of the plane’s exterior that could be salvaged from a field in Eastern Ukraine are attached to a metal frame, complete with an interior walkway so you can even walk through the plane as you would if you’d been boarding.

Other parts, including the plane’s wings and a door, are displayed on the ground. Everything is numbered, it is all evidence in a murder trial after all.

In true Dutch fashion, the rain loudly reverberated off of the metal roof of the hangar. It was freezing cold and, throughout the day, helicopters buzzed overhead. As far as I know, that had nothing to do with the court’s visits. Gilze-Rijen is an active military base.

It is both weirdly fascinating and incredibly challenging to look at what remains of MH17. It is a mass murder site. 298 people died on the flight. But the plane itself, or what is left of it, is an important piece of information about who and what caused their deaths. 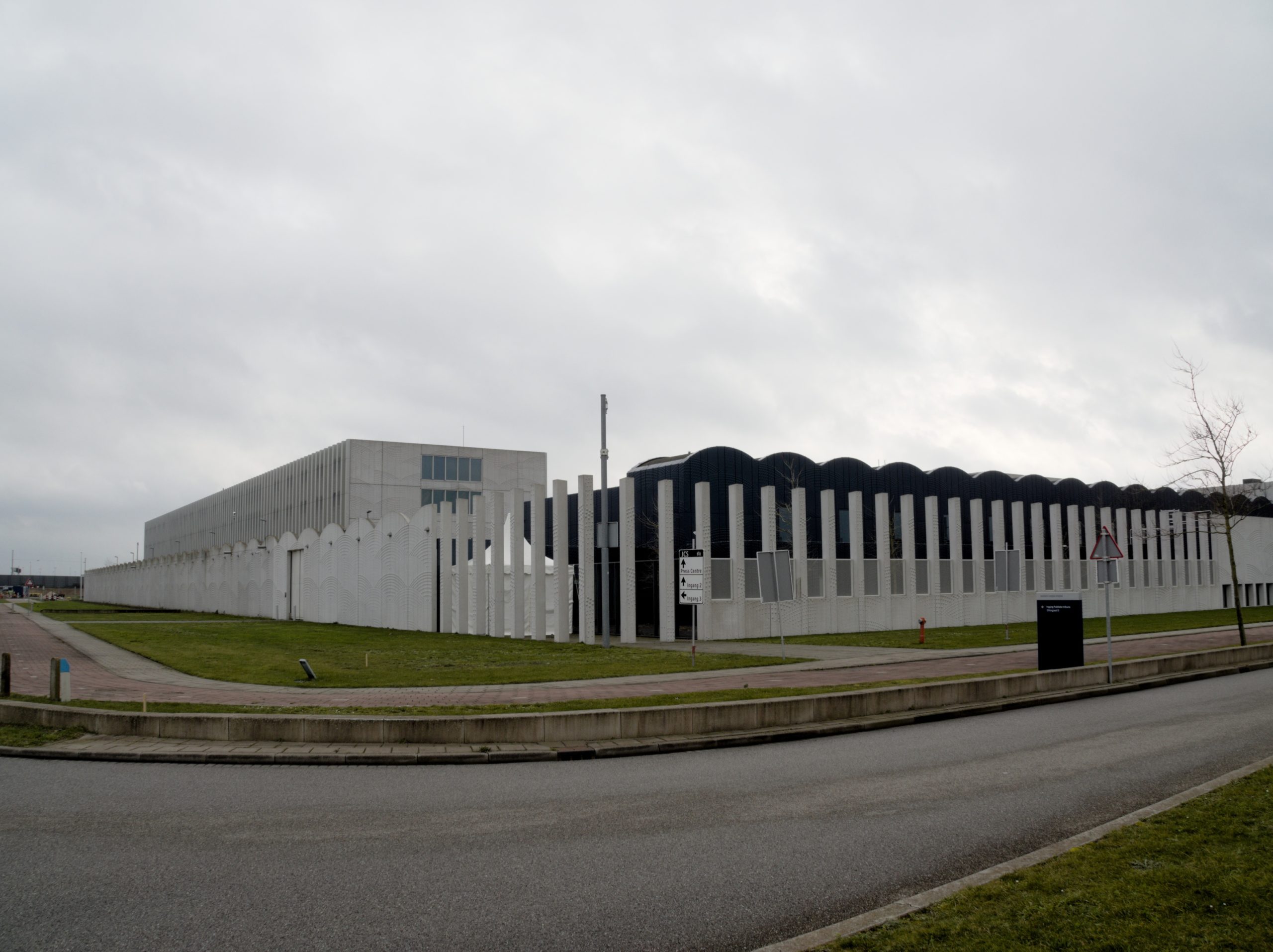 The high security courtroom where the MH17 trial is being held. Photo: N. van der Pas

From the moment the flight went down, the cause and culprits have been mired in controversy and misinformation. The Dutch government has charged four men, three Russian and one Ukrainian, with supplying the missile that shot down the plane. One of the men, Oleg Pulatov, is represented by counsel in the trial, the other three are being tried in absentia.

The part of Ukraine the plane was flying over on its way to Kuala Lumpur is part of a self-declared separatist region, backed by the Russian state which had declared independence after Russia annexed another part of Ukraine, Crimea. There still is an ongoing, violent conflict in the region. Both the Russian state and Pulatov’s defense team have pointed the finger at the Ukrainian military, going so far as to challenge the independent reports concluding the plane was brought down by a surface-to-air missile and not, say, a missile shot from a fighter jet.

‘The fate of flight MH17 has become a textbook example of a disinformation campaign,’ prosecutor Dedy Woei-a-Tsoi, told the courtroom on the second day of preliminary hearings in March last year. That campaign continues. Just look at my Twitter mentions whenever I discuss the case.

The day before, that same prosecutor read out the names of every single victim on the plane, including a professional acquaintance, Antoine van Veldhuizen, who was the managing partner of Expatica. At the time, I was working on a project with Expatica, and Antoine and I had spoken the day before he left, finalising some details. He had jokingly complained about flying with two kids. His entire family was on the flight.

I don’t want to overstate our relationship. Antoine and I were friendly, but not close. And nearly every person in the Netherlands can tell the same story. After all, 193 passengers on the flight were Dutch. In a country of 17 million people, that’s a larger portion than the number of people who died on 9-11. While I stood there looking at the wreckage, someone else mentioned their uncle had been a passenger on the flight. A court staff member said they had a colleague who had been on board.

I had described to a friend a few days before that I felt ‘deeply weird’ about going. I was both excited and interested to go. Much of the evidence presented so far has been highly technical documents that I’ve had a hard time wrapping my head around. But I also felt gross about being excited to see something so horrific.

After the day was done, I gave a lift to another journalist and, while we were walking to the car, I asked her how she felt. ‘Sick to my stomach, she said. It was also how I felt. I was glad to have the company on the drive back. We spent the journey trading stories about dating Dutch men and all the things we’ve been sent Tikkies for. It was a welcome distraction.

Later, when I got home, I cried for a while.