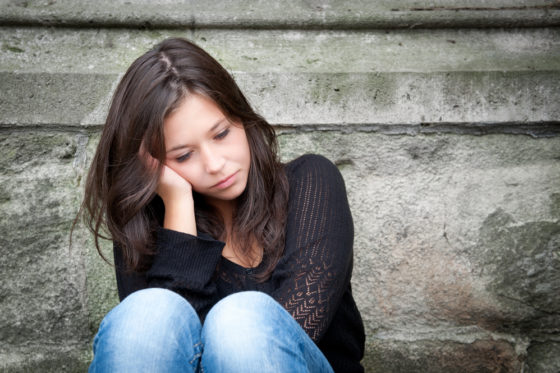 The Dutch have historically had the happiest children and teens in the industrialised world, according to repeated Unicef studies measuring their material well-being, life-satisfaction, health and safety, and academic and social skills.

But as the Covid-19 pandemic exacerbates inequalities across the board, Dutch youth are also suffering, if not on the macro statistical level, then certainly as individuals.

‘I am really worried when I look at the numbers,’ says Loes Keijsers, professor of Clinical Child and Family Studies at Erasmus University Rotterdam, of the increase in mental health crises and mental healthcare in general during the pandemic. ‘Children are doing incredibly bad. We know that Dutch kids are quite happy in international studies that measure life satisfaction, so we are shocked by the numbers.’

In pre-pandemic 2018, the overwhelming majority of Dutch children rated their life-satisfaction a 7.5 out of 10, with only 6% scoring below a five. During the first corona wave in February-March 2020—when Keijsers’ researchers looked at 1,000 youngsters between the ages of 10-25—58% still scored a 7.5 or higher, while 18% ranked their life satisfaction below a five.

But by January and February 2021, only 19% of respondents gave themselves a 7.5 or higher, while a whopping 33% scored below a five.

‘It’s a five-fold increase,’ says Keijsers. ‘This age group should be happy and full of hope. It’s really sad.’

We’ve seen the other statistics and read the news about the struggles of Dutch youth daily: calls to the Children’s helpline Kindertelefoon regarding depression, loneliness and suicidal thoughts have increased since the first lockdown, the latter two by a third. Youth Think Tank Corona Crisis says 16-35-year-olds fear for their future when it comes to finding work, affordable housing and climate change.

And let’s not forget love and sex. The Rutgers centre focusing on sexual and reproductive health and rights, along with the Soa Aids Nederland, has warned about the risk to the sexual development of young people after finding that those between the ages of 16-20 are having significantly fewer dates and less sex than before the crisis.

These are precisely the indicators that researchers look for when measuring the well-being of young people. ‘There’s a hopelessness in youth,’ says Keijsers, ‘with more than half feeling the pandemic will have a strong impact on their future.’

Part of that has to do with Dutch kids’ sense of freedom and autonomy. It’s always been relatively high compared to other countries. But as lockdowns keep most schools closed and the recently-imposed curfew further limits social interaction—at the same time that worried parents pull back on the autonomy reigns—personal growth is taking a hit.

‘Education, hope, falling in love, getting pleasure are really limited, which is why life satisfaction is decreasing’ says Keijsers. ‘These are super important development tasks.’

Another problem, says Keijsers, is a lack of investment in the mental health care of youth. Waiting lists to get psychiatric help, she says, are unacceptably long.

Nineteen-year-old TM came out as both gay and non-binary during lockdown. TM, who doesn’t want to use their full name, is living back home with their parents in Amsterdam after briefly attending university in Nijmegen.

A hockey enthusiast, TM lost their job coaching when team sports were limited as part of the lockdown measures. TM says spending so much time at home during the lockdown has led to much self-reflection, but TM has to wait six months to talk to a mental health professional about issues that have nothing to do with the pandemic.

‘The waiting is terrible,’ says TM. ‘A lot of people are coming out more now. I don’t like to see myself as a victim, but you must convince people you need help. People who grew up closeted are more likely to have mental health issues, and for some, being locked in a house where it’s not safe and you can’t see your friends is dangerous and robs you of your freedom to express yourself.’

TM is fortunate that their parents are accepting. According to experts, it is precisely the quality of family life that is the crucial determinant of adolescent happiness.

Ruut Veenhoven is professor of social conditions for human happiness at Rotterdam’s Erasmus University. He says after family life, school and friends are the second and third biggest factors contributing to happiness in youth.

And while school life and friends have been limited, for the majority of Dutch youth, he says, family life remains the same. ‘Young people can do without friends more than family,’ he says. ‘Although if they can’t get away, social pathology in the family hurts more. But what keeps kids happy in normal times keeps them happy during a pandemic, too.’

Keijsers says the pandemic has exacerbated problems in houses where conflict already existed. ‘The most vulnerable in society—those living in small apartments, with many kids, with parents perhaps doling out harsh punishments and not supporting home-schooling—those are the youth I’m most worried about,’ she says. ‘Many will be resilient, but for some, the scars you get during adolescence are the beginning of a life of misery. I’m not worried about the majority, but about the large minority.’

Sociologist and columnist Shervin Nekuee says that not only have youth been told to limit doing everything they love, but they’re being victimized as virus-spreaders by leaders who lack the compassion to understand the burden they’re placing on them.

This, he says, is because those in positions of power have lost touch with the people they govern, especially when it comes to the lower classes. It was economically disadvantaged youth, he said, who mostly took to the streets during last month’s riots.

‘The street is their space,’ says Nekuee. ‘From the uber-Dutch youth in Urk to the immigrants of Rotterdam, the avondklok affects lower class kids most. Their reaction to the stress of the coronavirus is the typical reaction of the lower class—it explodes, not implodes. Going to a psychologist is not the normal thing for them to do. You go up the street and shout and fight.’

Police say teens were using social media to call people out on the streets. Sixteen-year-old Sophie from Amsterdam saw the messages. ‘A lot of people were posting about it in their Snapchat stories, saying be there, we’re going to riot, bring fireworks and whatever you have, we’re done with all this curfew stuff,’ she says. ‘Everyone is bored and doesn’t know what to do.’

What was less predictable, says Nekuee, was the response to the riots. ‘Everyone on the top was surprised,’ he says. ‘But I’m surprised they were surprised. You can expect boys and girls to riot. The new thing is we’re in an age where leaders don’t expect it and are alienated from society.’

Caretaker Dutch prime minister Mark Rutte has been alternately praised and pilloried for his response to youth issues during the lockdown. Keeping schools open—whether intended to help parents work or for the mental health of students—has been a policy priority throughout the pandemic, even when many health experts were clamouring for their closure.

During a May 2020 press conference, the prime minister gave a shout out to youngsters to help shape their future. ‘Your ideas and creativity are very much needed,’ he said. In a webinar with him last month, some 2,500 youngsters took up the call and gave Rutte thousands of suggestions – ranging from more flexible handling of student debt to offering financial incentives for businesses to hire young people and making it easier for them to buy a house.

But writing in de Volkskrant last week, Knijnenburg, Amsterdam mayor Femke Halsema and others said the government needs to do more, including offering youth rapid testing, extending the age limit for organised sports from 18 to 25 and moving young people to the front of the vaccination queue.

Lobbying for youth, they called on government advisers ‘to give more weight to the importance that young people should be able to resume their normal life.’

Emma, a healthy 18-year-old from Amsterdam, found herself panicking about being sick when Covid-19 hit last year. She saw numerous doctors and specialists for stomach ailments and heart palpitations and is finally in therapy. It was her fear of germs that ultimately got her there.

‘Feeling sick was one thing, but the anxiety made it worse,’ she says. ‘I all the sudden realized that so many people touch the bread I buy or the door handles to shops, that I had a hard time living my life. Talking to someone is good, but going to school and being with friends is even better. The distraction and routine helps.’

‘We need to invest in the living future of the country,’ agrees Keijsers. ‘They will be dealing with all of the societal challenges ahead, such as digitalisation and climate change. Creating emotionally powerful and resilient youths, who will be taking care of us one day, is the best possibility to achieve this.’

Veenhoven is not particularly worried about Dutch youth. Although the most recent data is still being processed, he says there will likely only be a small dip in overall happiness, as the winners (such as students who don’t like to go to school or are bullied) and losers (those needing more social interaction) cancel each other out. He points to the freedom that makes Dutch children thrive, even in a lockdown.

‘The concept of freedom is much broader than an avondklok and school closures,’ he says. ‘Children here have a say in what they’ll do and where their family goes for holiday. They are constantly challenged to express themselves and say what they want. That hasn’t changed. This is something we can handle.’